An experiment is always a challenge. A large HoReCa company has decided to launch YAY THAI, a new Thai street food project, and open its first food court outlet. The experiment was a success — and the second facility of the new brand appeared on the street known for its nightlife. But the sky is no limit so it opened a third cafe in a large shopping center. Three locations, three self-challenges.

The company approached the launch of its new brand experimentally — we were tasked with opening the first mini-corner as quickly as possible. This was due not only to the timing but also to the fact that the owners of the company wanted to add spontaneity to the process of making a new brand. Speed ​​became the key element in the work on this project — we quickly made a set of design elements that we could then adjust regardless of the typology of the area. 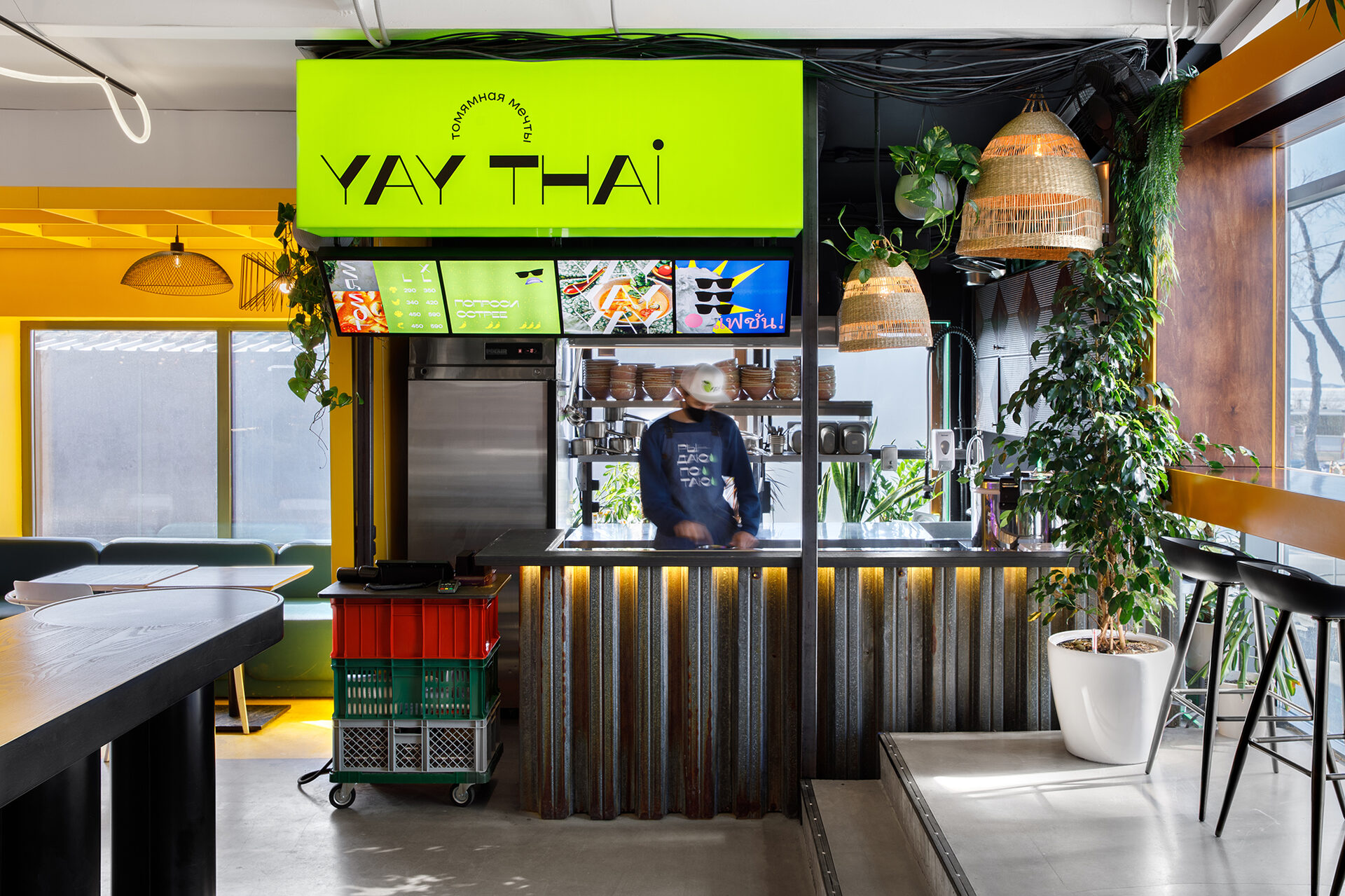 The first experimental space with an area of ​​only 7 square meters was launched at the Cooperative food court in Vladivostok. Initially, this site was not supposed to be used for placing the corner due to its inconvenient location. But in the end, we were able to offer a design solution that helped the corner fit organically into the overall space of the food court.

The main structural element here was a module made from welded metal pipes, where all the kitchen equipment was placed. Thanks to the simplicity of the design, builders, electricians, and other contractors were able to work at the same time, which helped to significantly reduce the time of installation.

We attached a lime lightbox on top of the structure, which became a striking visual element gathering the attention of food court visitors. We also added live plants and some accent lights around the perimeter of the module. The most vibrant element of the corner is the profiled sheet on the front side of the stand. We took this sheet off a real garage — it spent many years on the street and hence had its mood and texture. Before installation, we covered the sheet with a special varnish. The checkout counter is made of several tied together colored storage bins — these are actively used in Thai markets, thus creating the feeling of a spontaneous and quick appearance of the corner in its place.

While working on this location, we laid the basis for the main architectural solutions of the brand, which we began to develop at the subsequent sites. 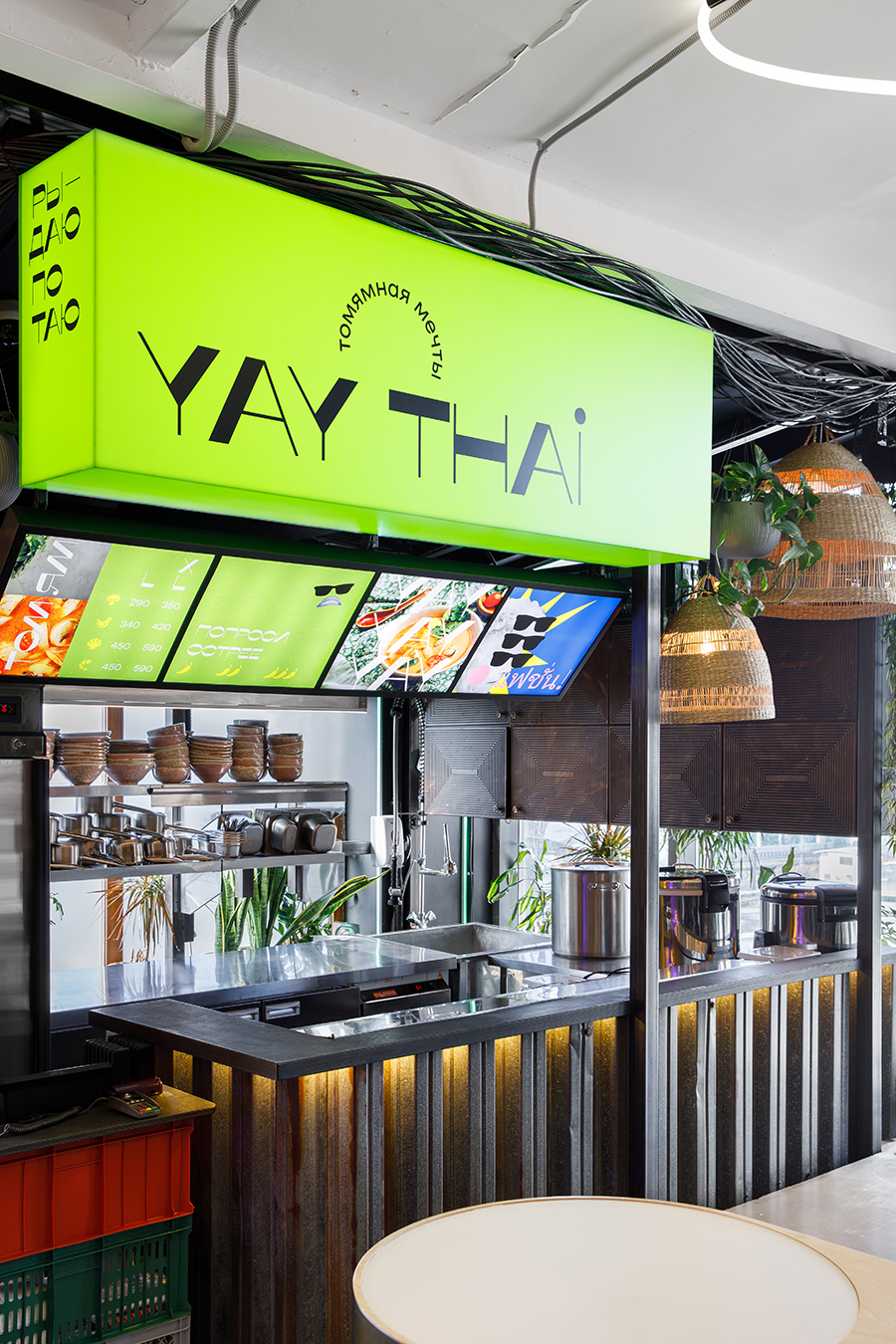 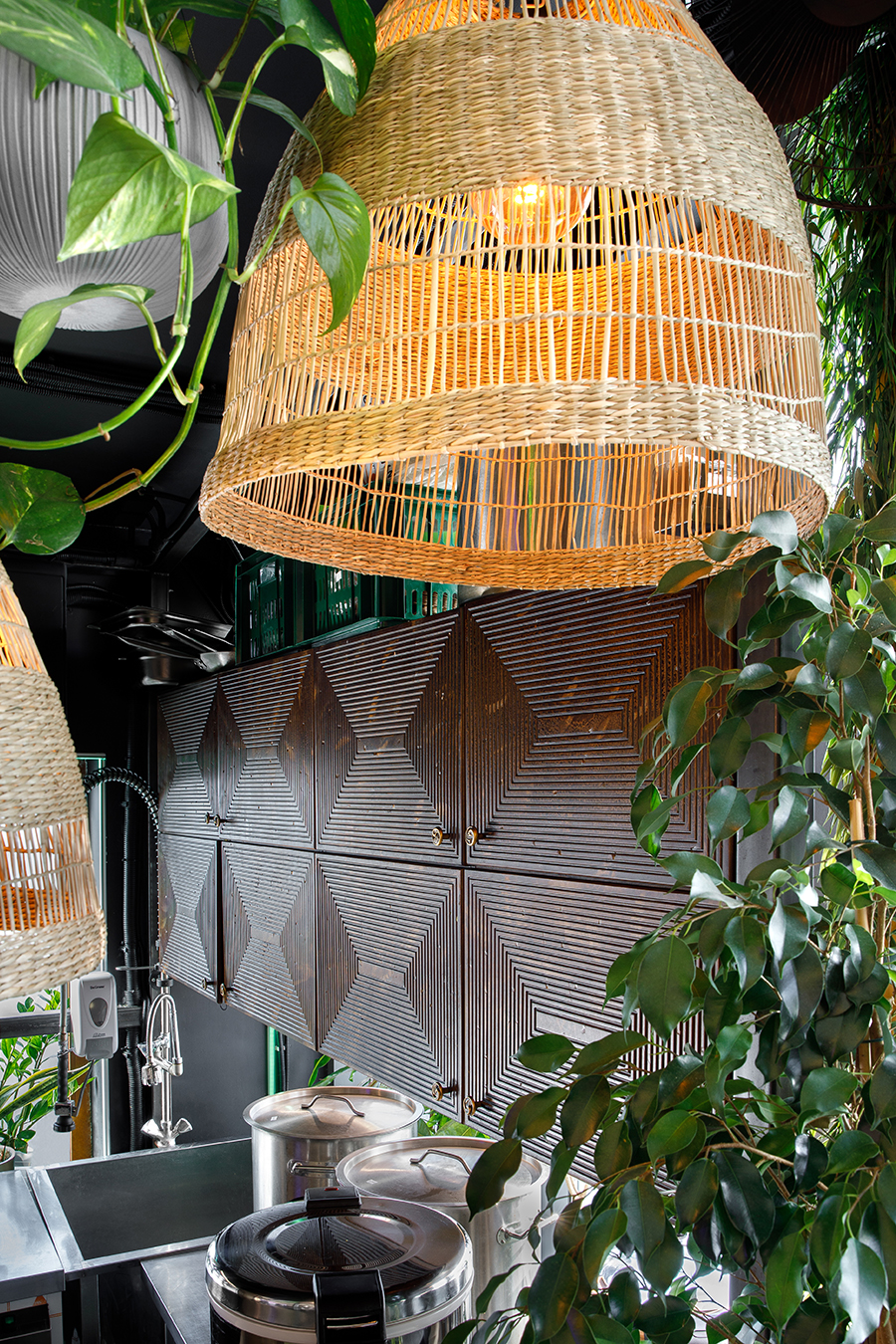 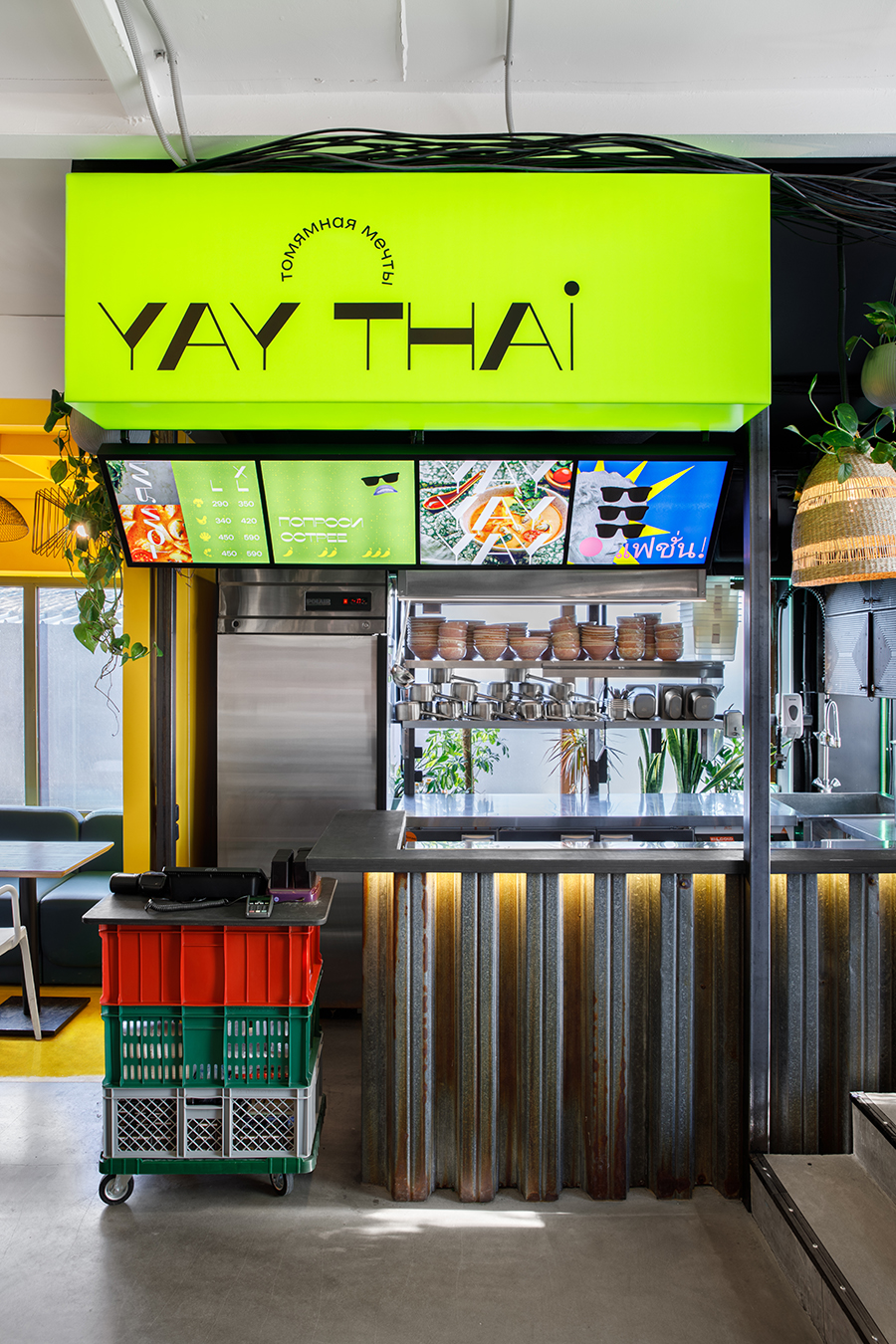 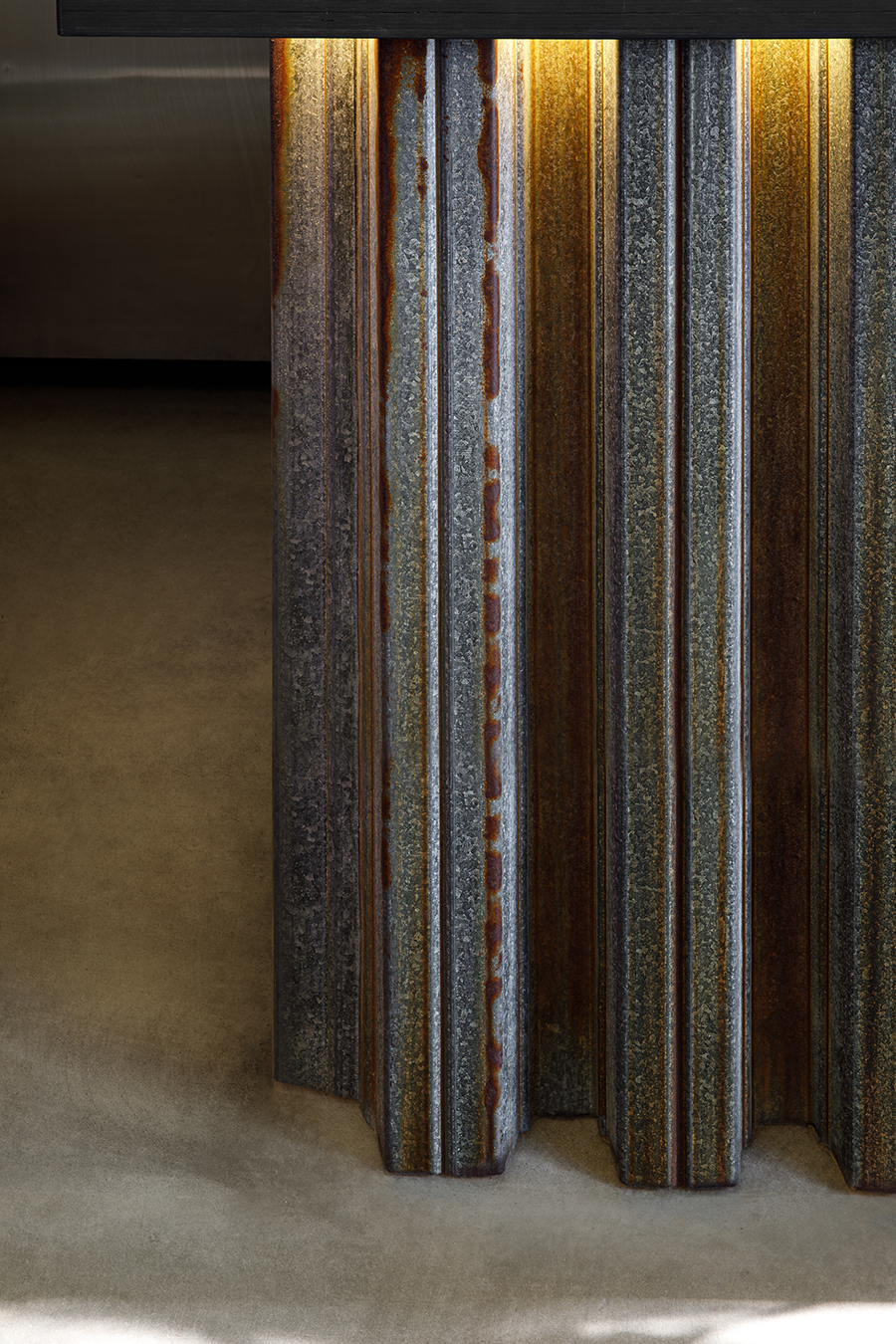 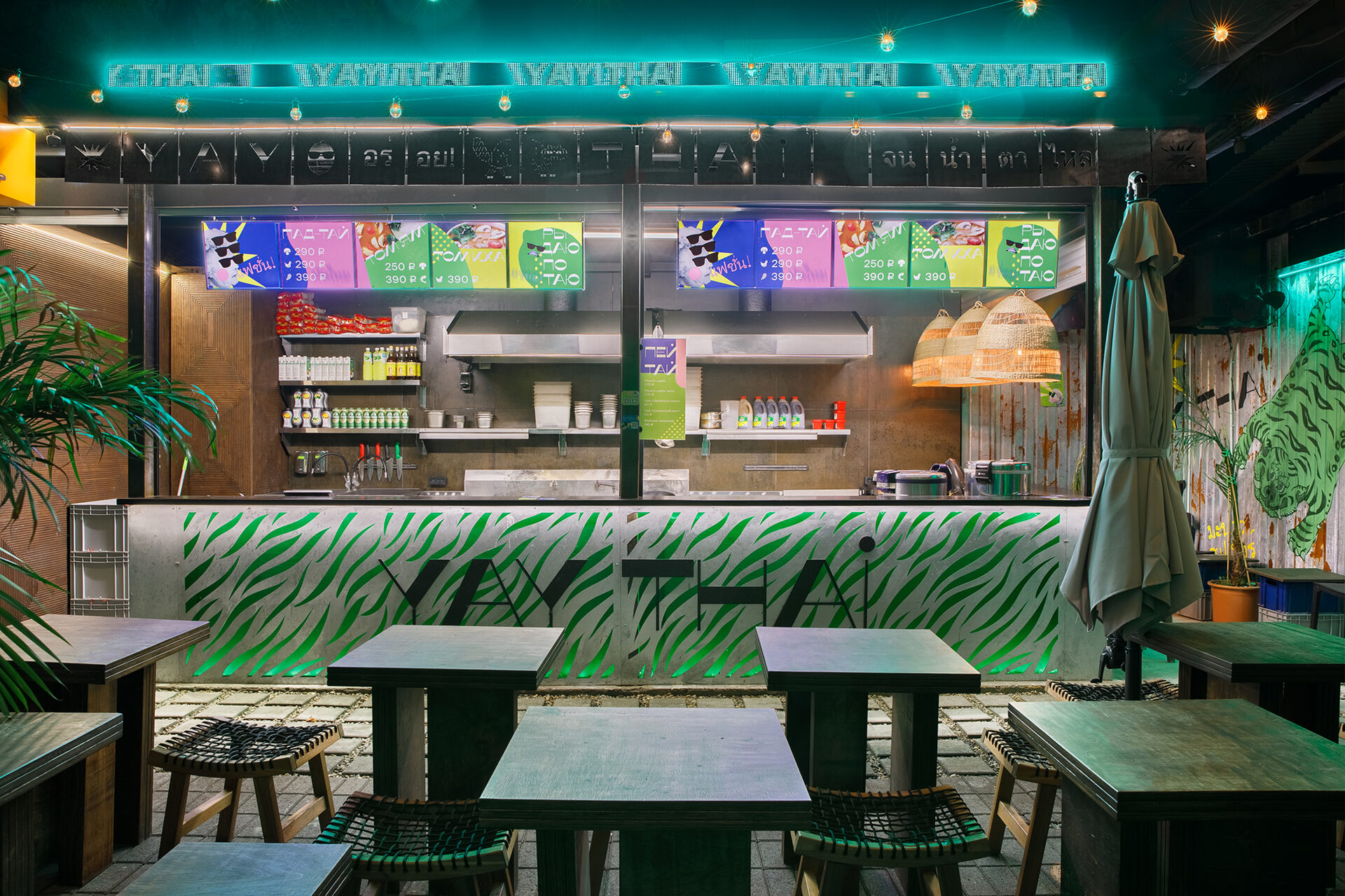 After the successful launch of the first corner, the company decided to launch a second facility on the street that already embodied the street food format. A busy street on the embankment in the center of Vladivostok was chosen as the location. This is one of the most popular places in the city in the evening, there are numerous night bars, cafes, and restaurants, so this location perfectly suited the mood of the brand.

Openness has become one of the key brand features that we formed when working on the first project of the company. It was continued here as — we arranged the technological equipment of the kitchen in such a way that the cooking process was as visible as possible and became part of the emotional experience visitors receive. 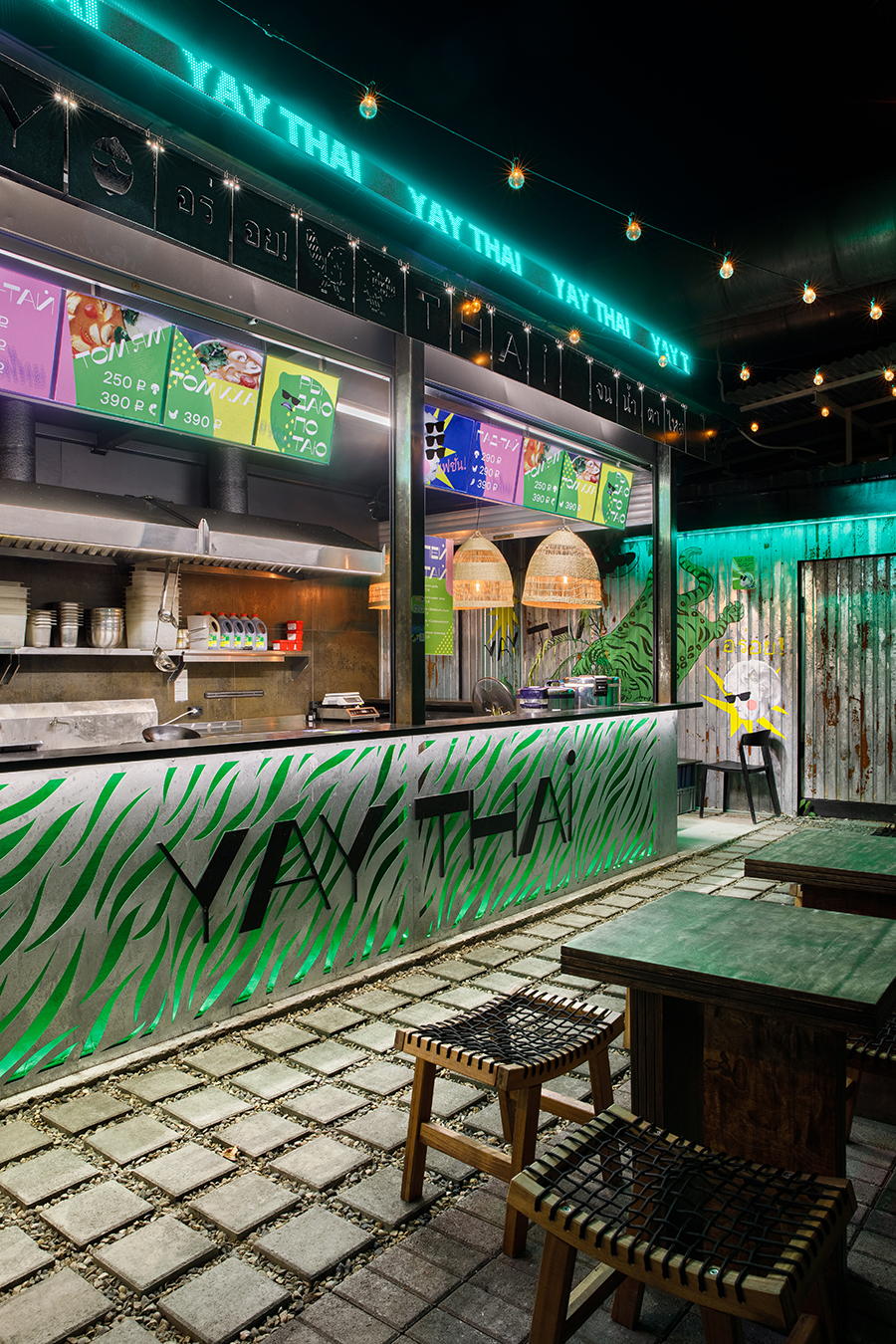 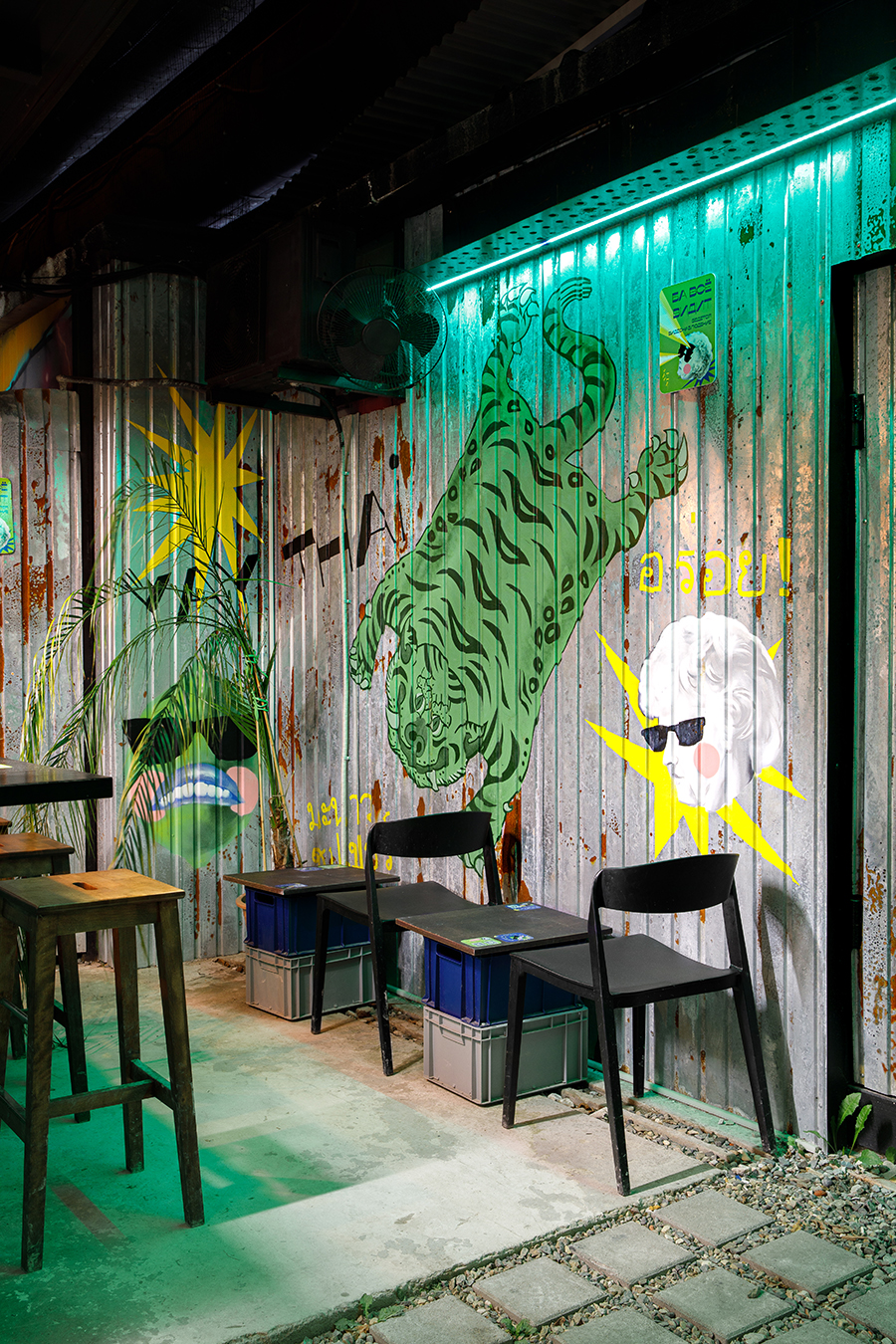 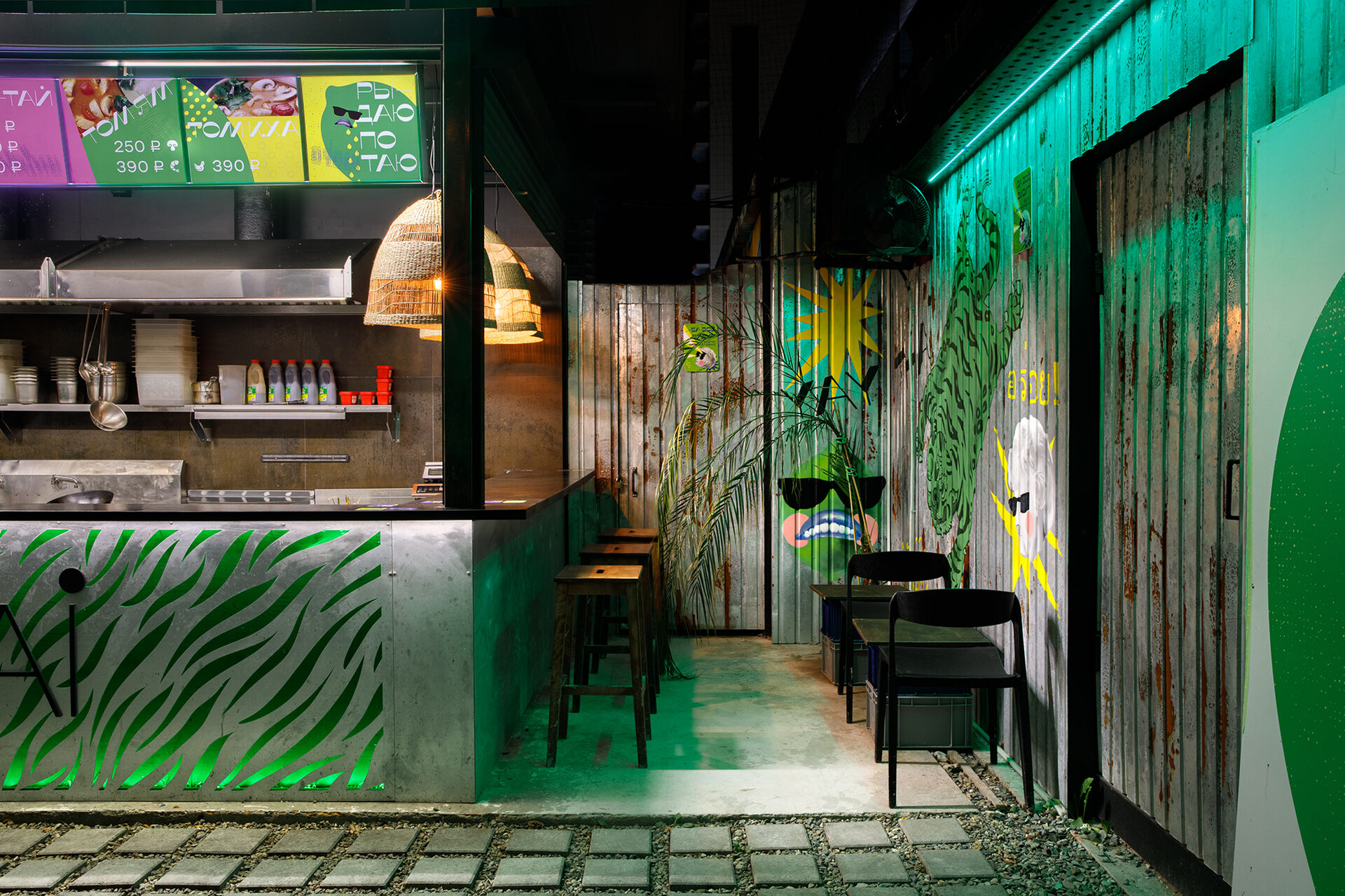 The increased area of ​​the location has made it possible to organize its own seating area. We put massive plywood tables designed for outdoor use there. The large weight of the tables allows you to leave them in place after closing the corner and not worry too much about their safety at night. The simplicity and roughness of the tables are balanced by slightly curved chairs with mesh seats, which are less likely to accumulate street dust and moisture. For a high seating position, we added several barstools at the counter. And for a more relaxed pastime, there are wide black chairs near low-set tables made of plastic containers.

The main finishing material of this zone was profiled metal sheets with one bright quality — before installation, it was put in the sea for several weeks and then treated with special acid. All this was done to convey the feeling of very old material. Vibrant pictures with a lurid tiger and yellow flashes were added to the walls to add some crazy vibes to this area. 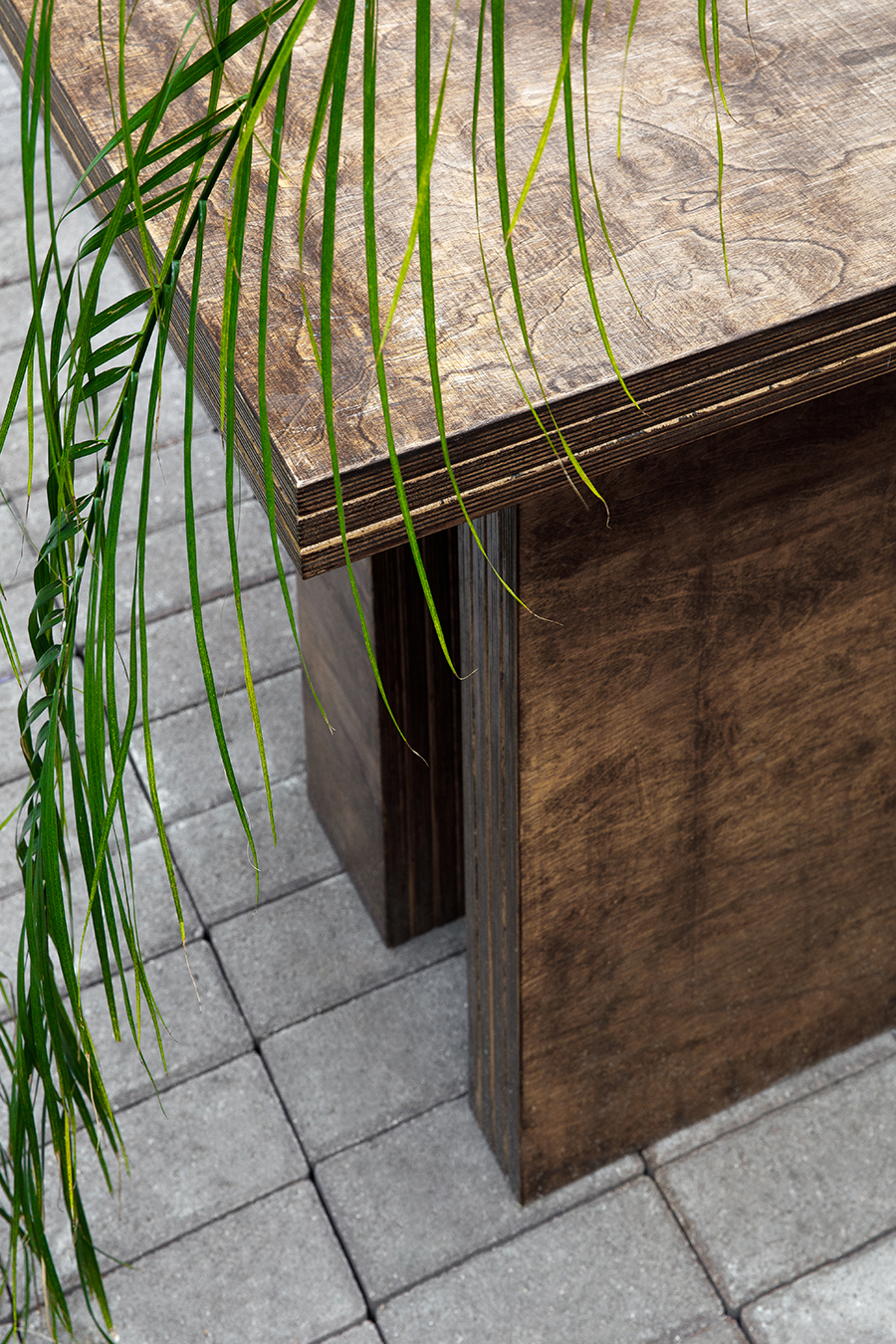 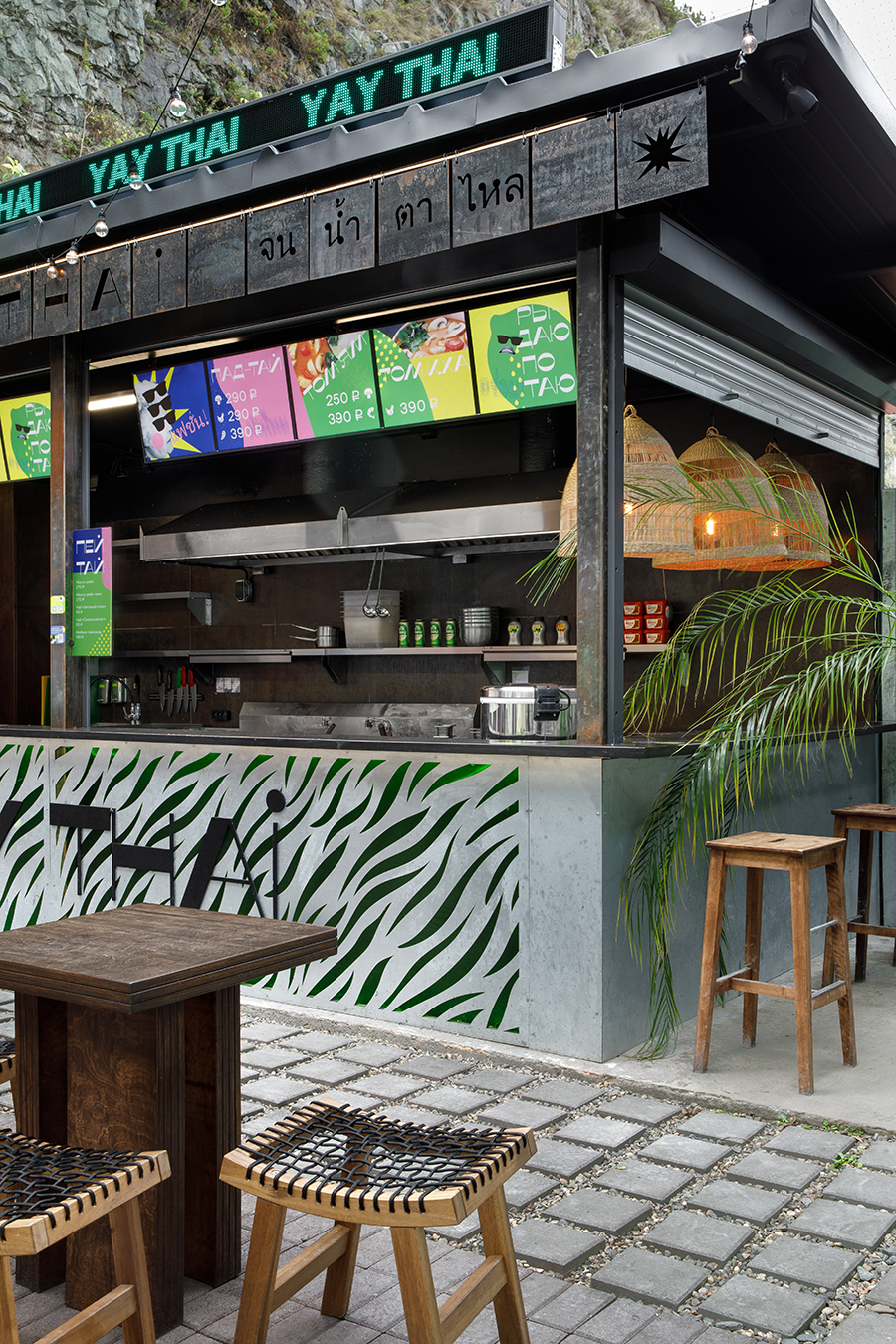 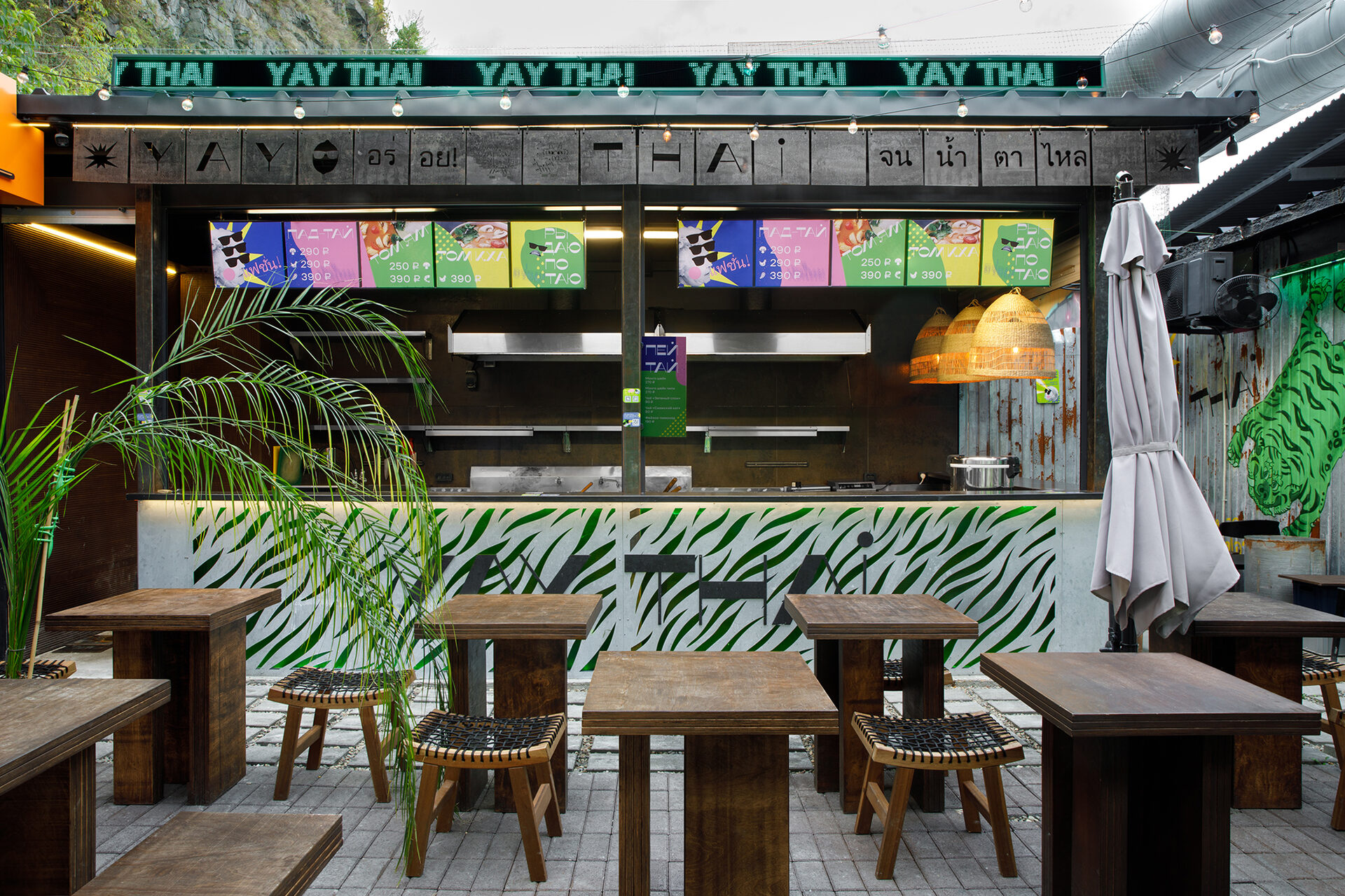 The tiger theme continued on the lower panels of the bar — we cut some narrow stripes in the metal and got them illuminated to help create extra depth. The dynamics of the space are added by the lime rolling ticker, the LED letters of which cut the air even during the bright sunny day. Another dynamic element is a line of metal flags above the post with cut graphics that rocks in strong blows of sea wind. The order waiting area in front of the corner also seems to be moving — large paving slabs here are embroidered with pebbles, and small tiles in the landing area are gathering in even rows.

The frantic rhythm of the implementation of this project led to the fact that there were several unfinished design elements in the area. However, they all fit so organically that we decided not to put the finishing touches on them. This helped create a feeling of slight negligence and thus further express the brand's values. 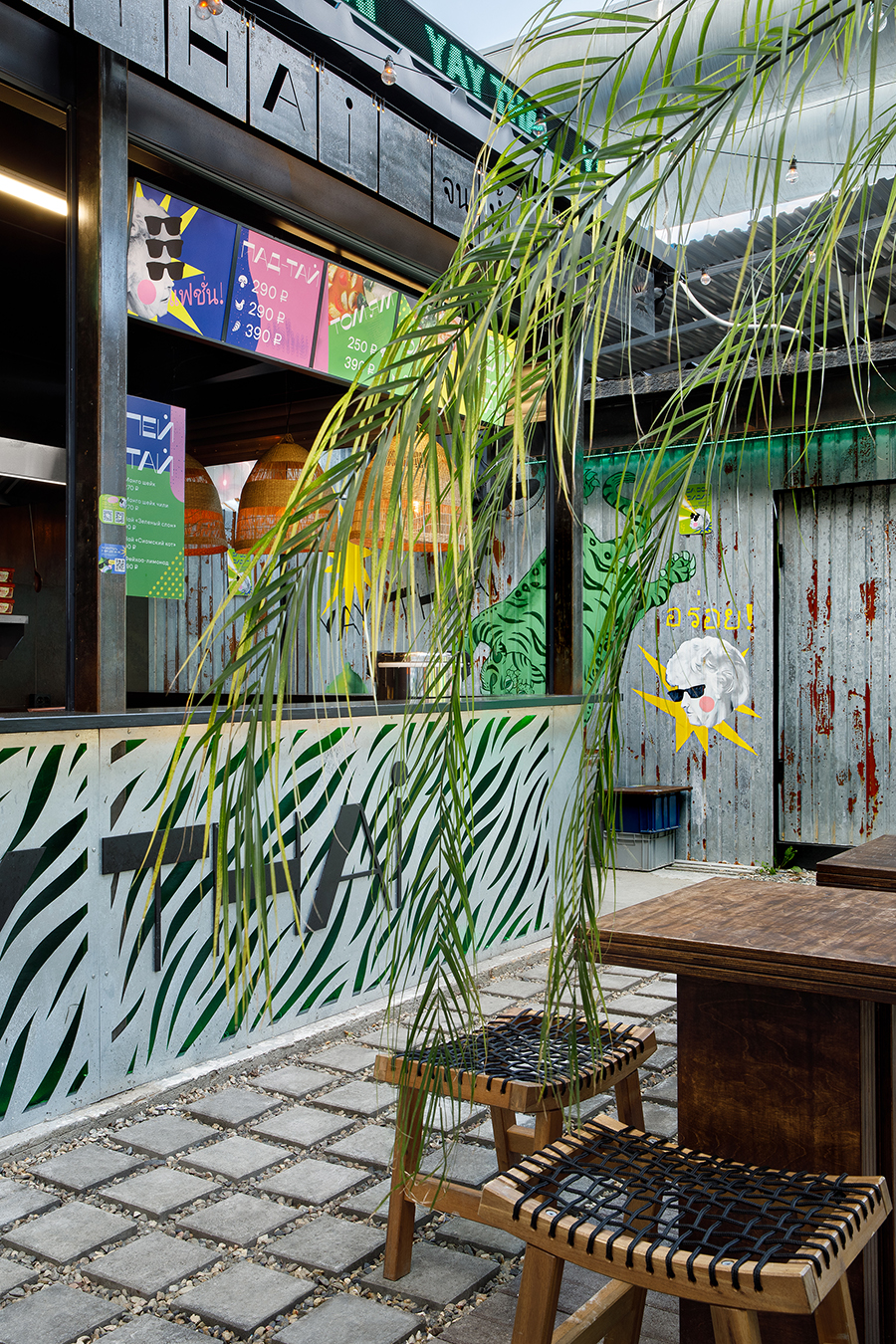 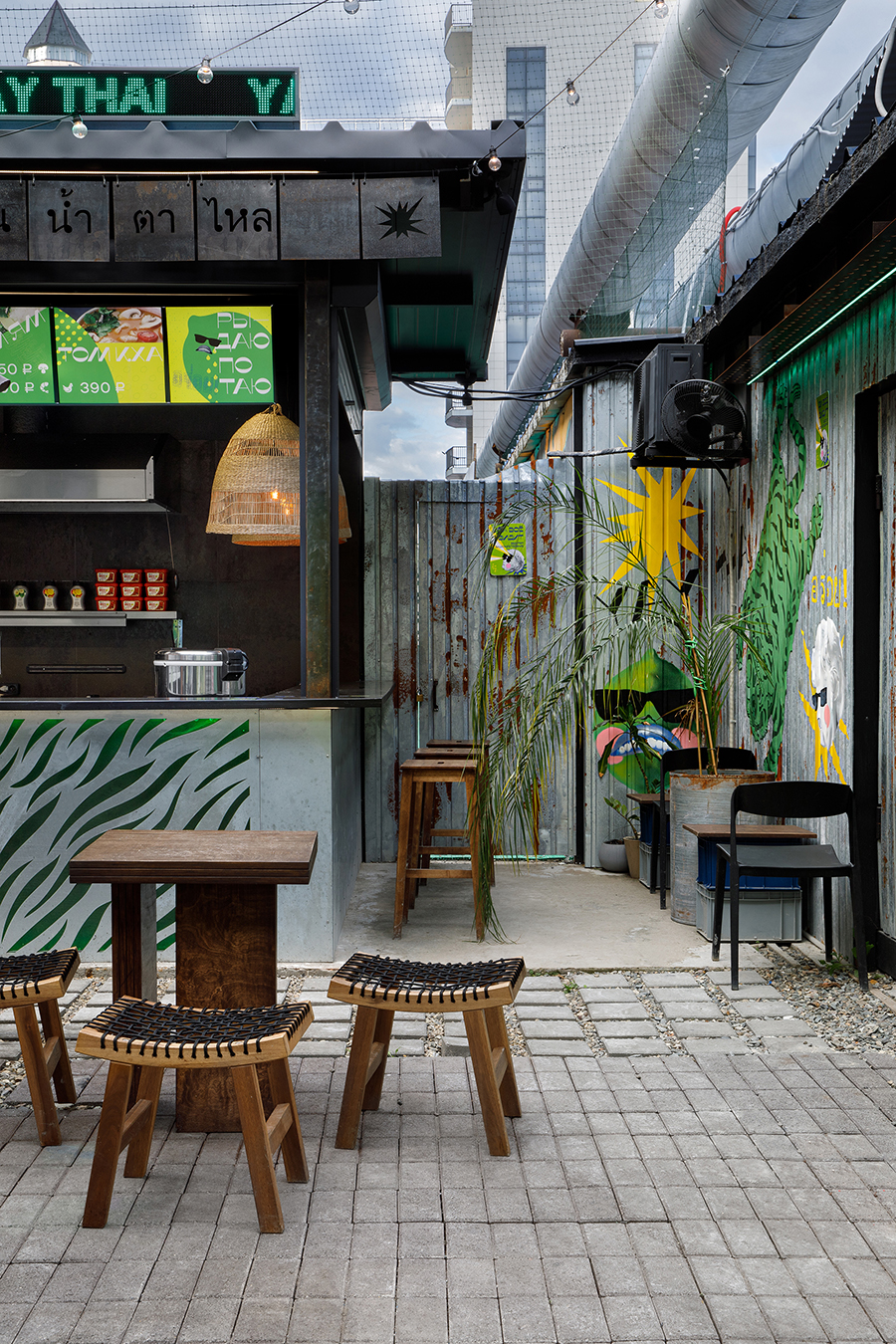