Big companies require to change with time. Coffee Machine is a federal auto cafe chain for which we reimagined its existing interior design as part of the Coffee Machine Red project. We conducted a study of the company's visual assets and presented what the new fast food facility of the chain would be like.

After the successful realization of the project, we were given a new ambitious task: to reconsider what the existing pitstops of the network might look like. In addition, the company began to think about expanding the range of formats of its cafes and opening small coffee stands in shopping and business centers. 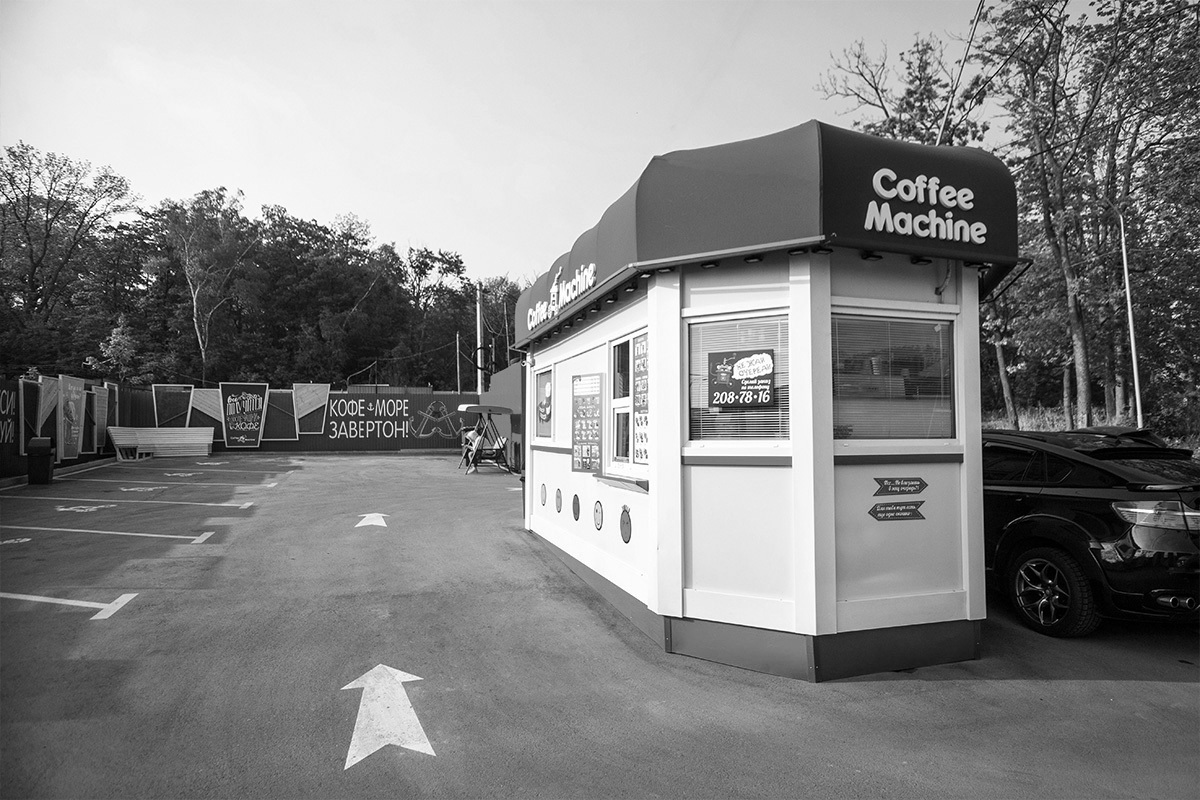 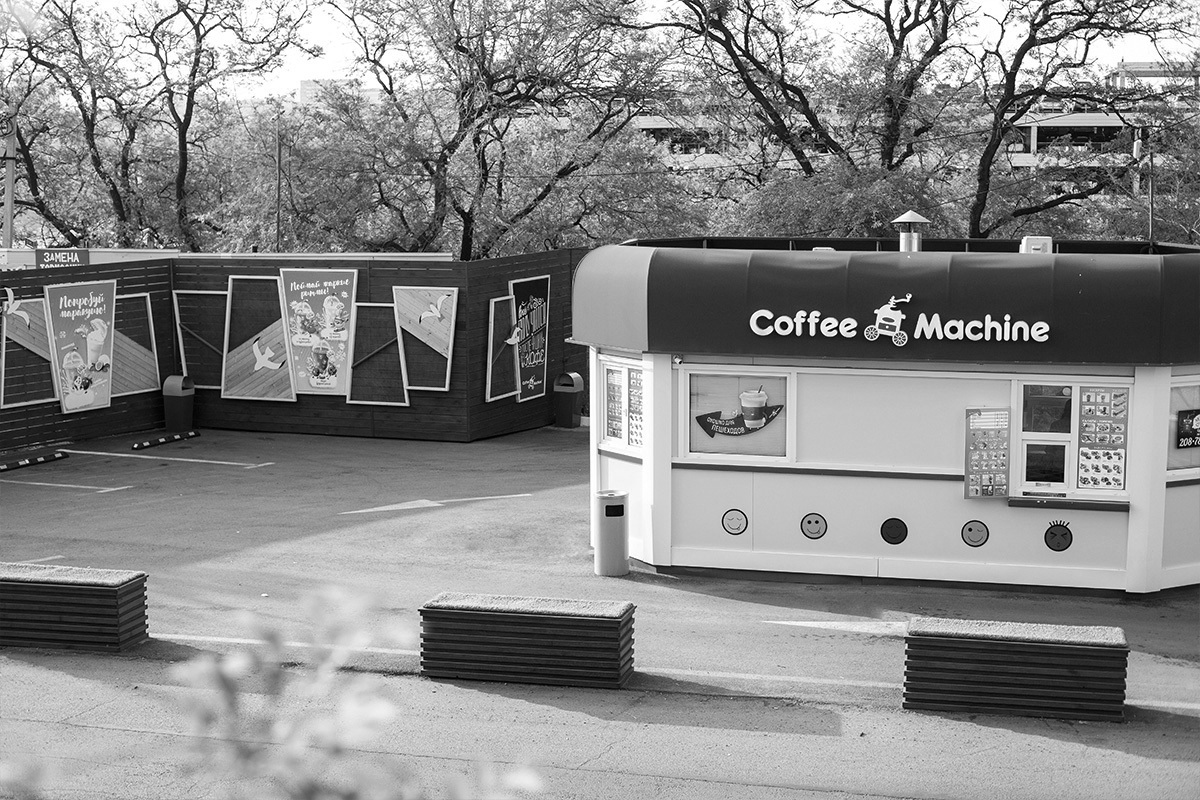 The company's existing pit stops are one-story sandwich panel cabins with cut corners. There is a fabric awning around the entire perimeter of the building and small windows through which the cafe staff serves visitors in cars. These pit stops are pre-assembled in the company's workshop and transported to the installation site by rail and then by truck. The company wanted to improve the technology for the production of structures, so we suggested creating new pit stops based on 40 Ft freight containers. Their universal size is convenient from a logistics point of view, and the frame structure of the containers allows the design of two-story solutions without additional support.

We've added some dynamics to strict rectangular volumes by placing the top module slightly offset. As a result, a canopy appeared over the windows along the larger edge of the first floor, and a small balcony with an accentual staircase at the end. We located the production installations on both floors, which made it possible to almost triple the usable area of ​​the pit stop. 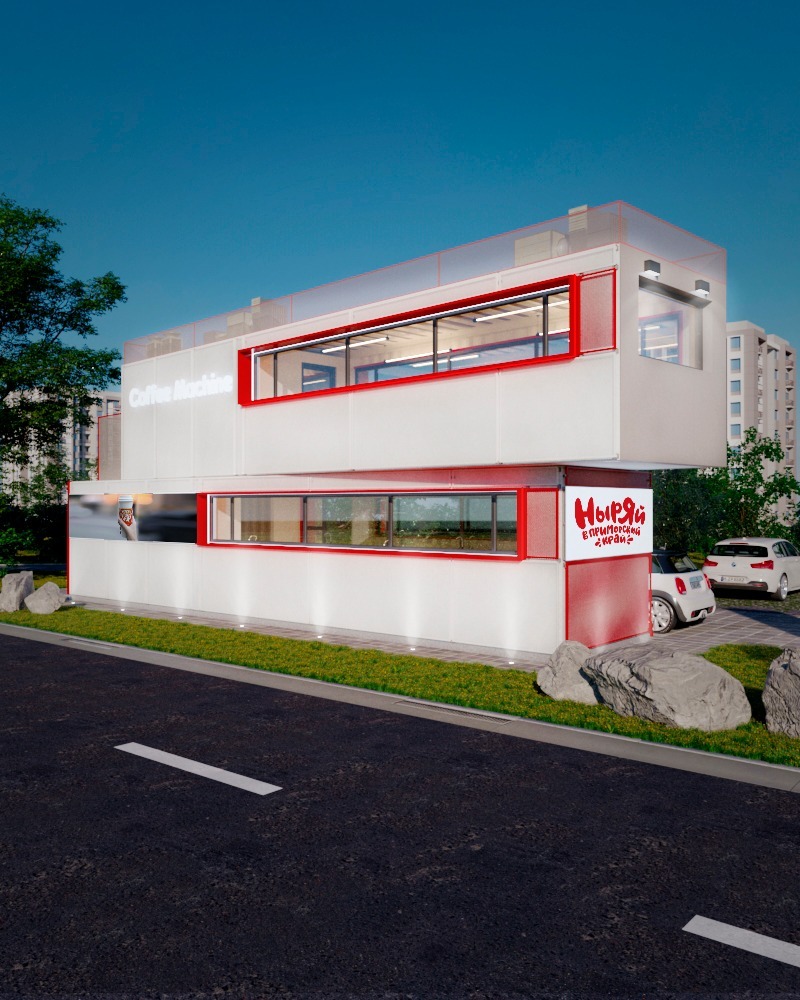 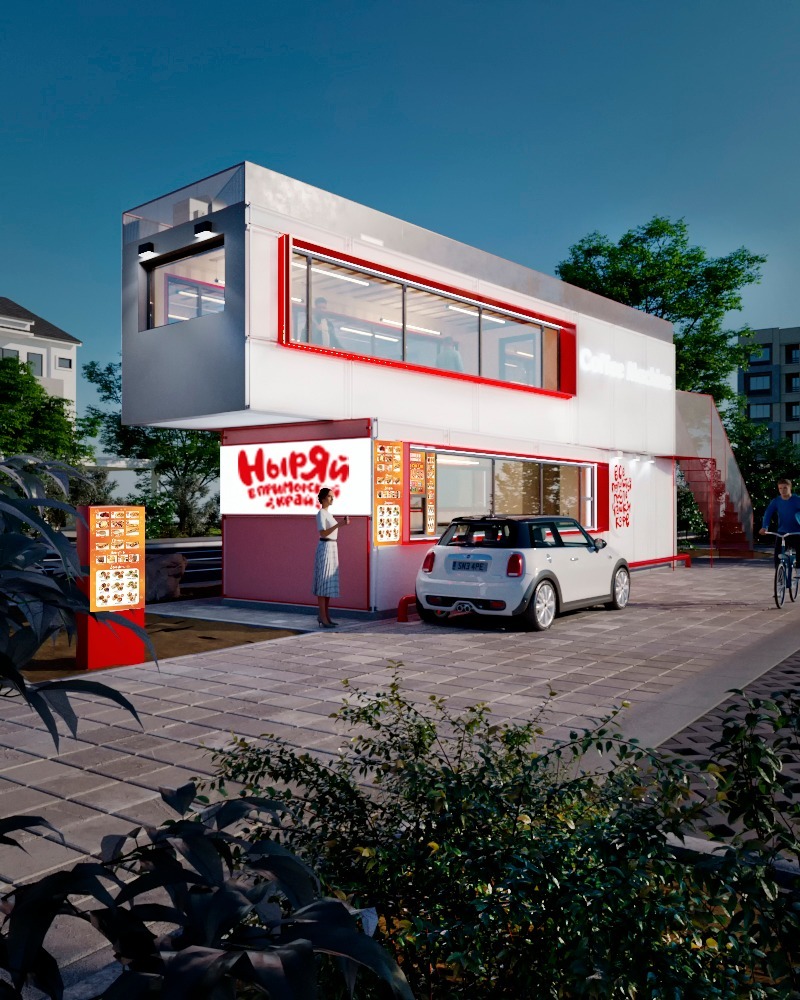 In addition, the height of the story has increased, and this has added architectural expressiveness to the pit stop. At the same time, in general, the structure does not seem bulky, which is achieved through the use of white perforated panels in the facade ornament. This solution allows light to pierce the panels and create diffuse shadow contrasts. The glazing area has also increased significantly, which helped organize the open kitchen area on the ground floor and increase visitor engagement. 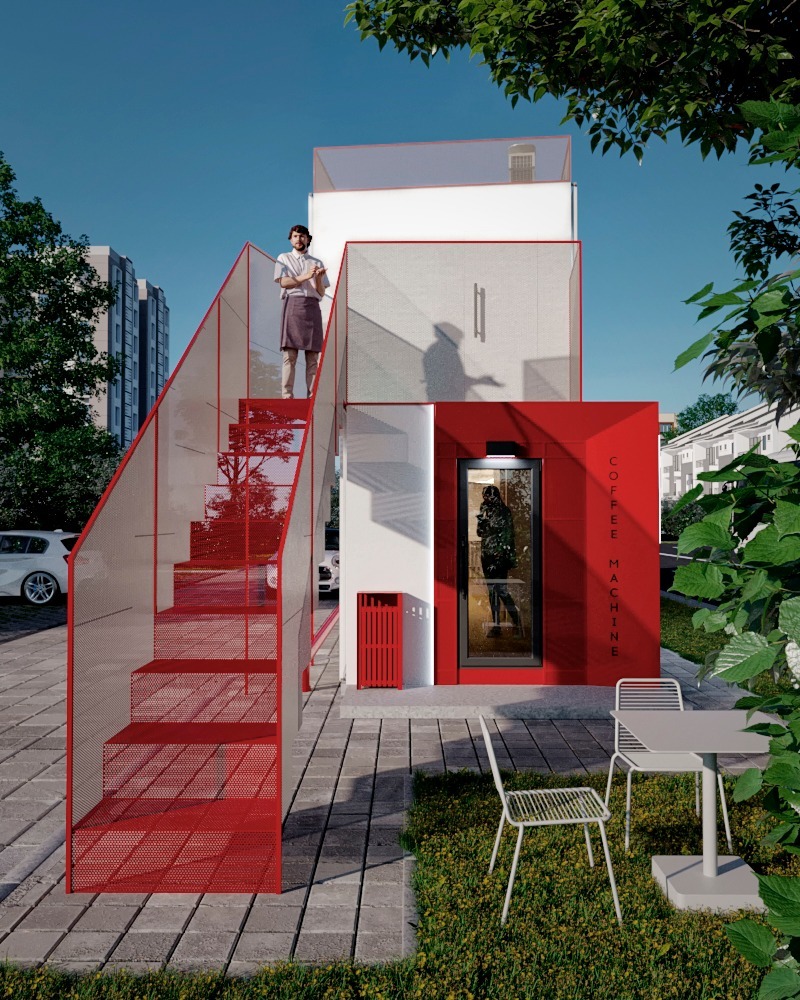 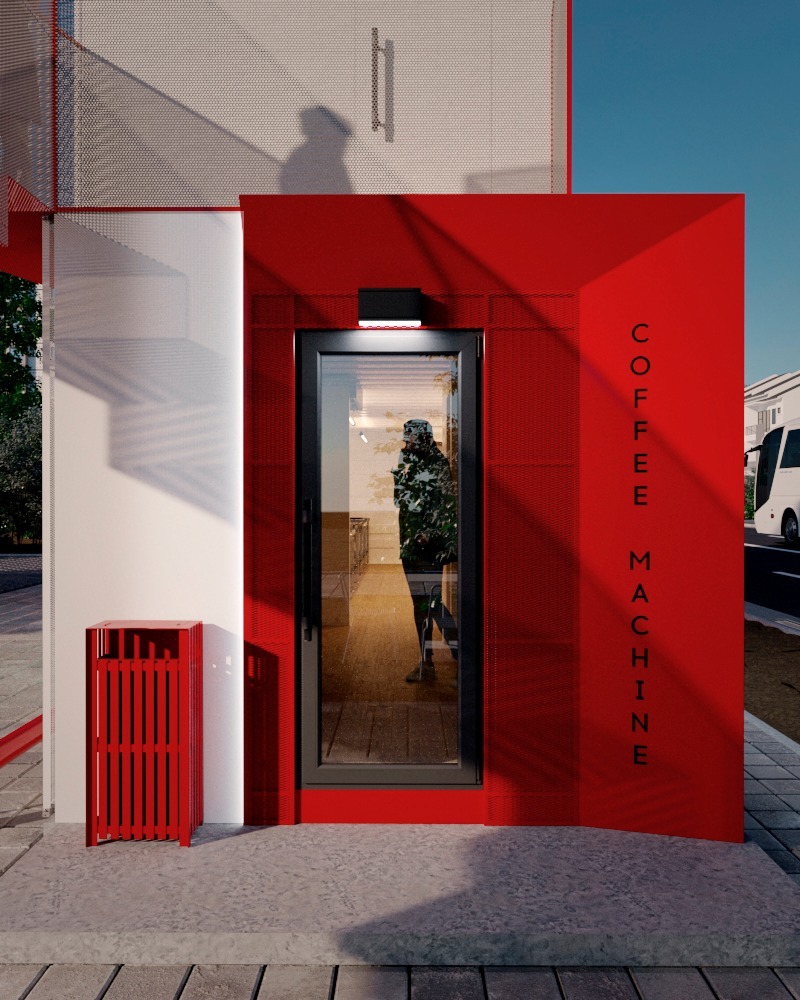 The pit stop interacts with the road — the upper module is slightly turned towards the roadway as if it was averting the traffic flow. The symmetrical headlights at the front create associations with car headlights. At the end of the module, there is a translucent staircase made of contrasting metal sheets, which makes it a local Instagram hero itself. The entrance to the pitstop is paved with square stone tiles, which creates the effect of a small street. 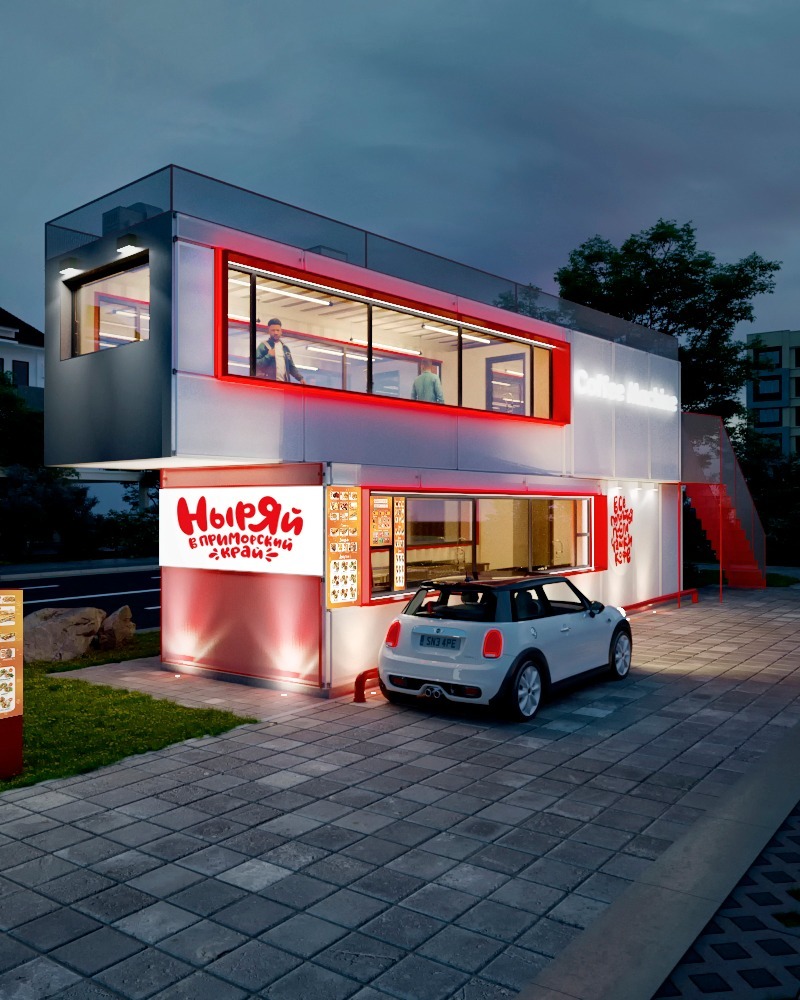 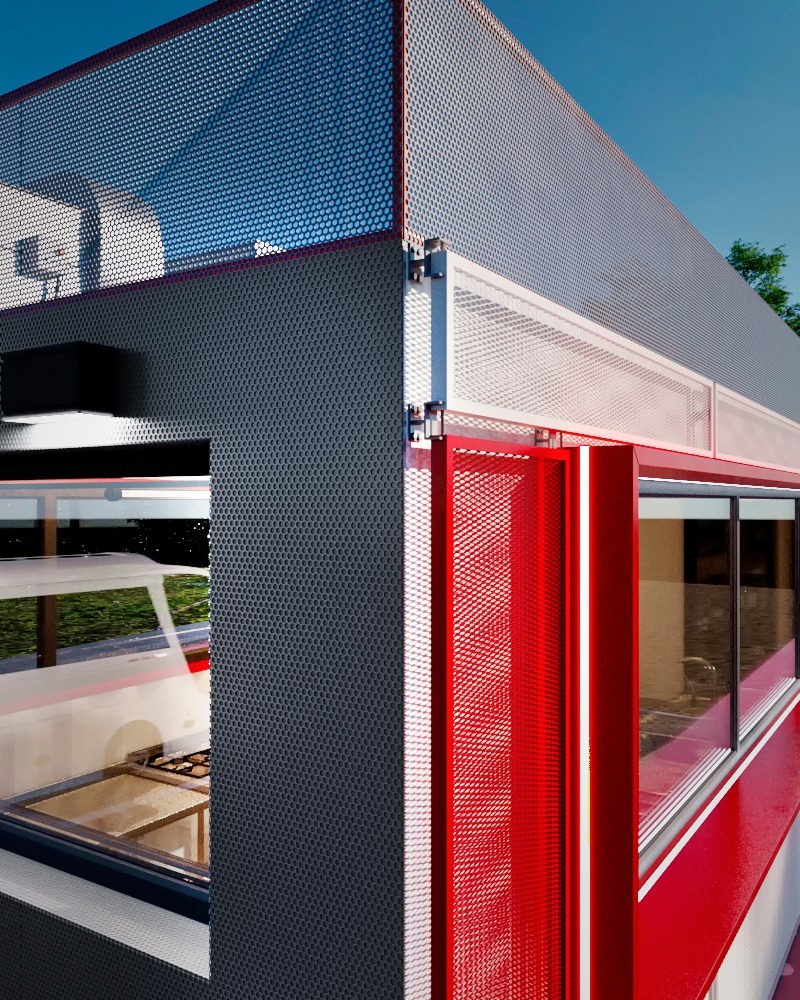 After developing the architectural solutions, we faced a new task — to show what the chain's coffee stands will look like. The company planned to try out the new visual language on a small scale first before risking global changes to its existing pit stops.

It planned to open coffee islands in the shopping and business centers throughout the city, and it was necessary to provide different module formats. For example, a coffee point could be located in a closed-off "cube" with three walls, along one large wall or in the center of a sales area. For each of these accommodation options, we have worked out our exclusive solutions. It is important to note that we made them without any reference to specific sizes — if necessary, the size of a coffee stand can be made bigger or smaller. 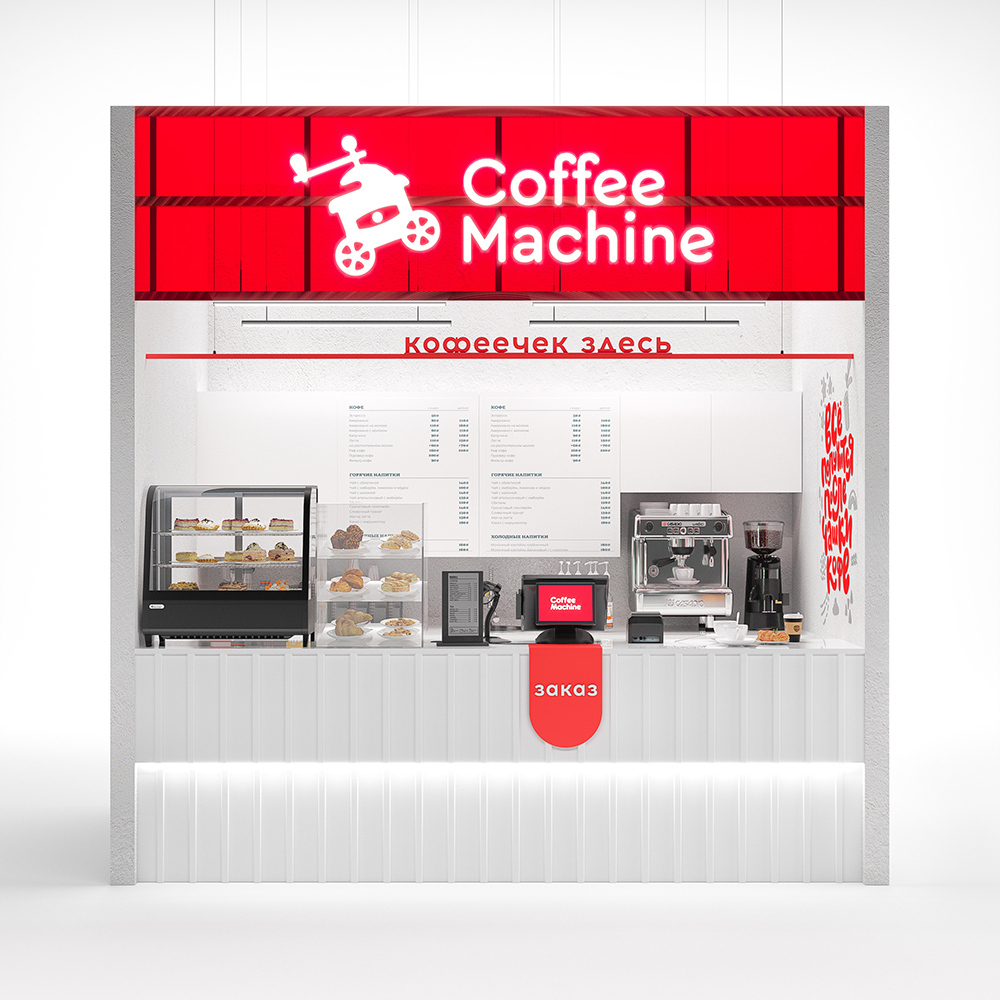 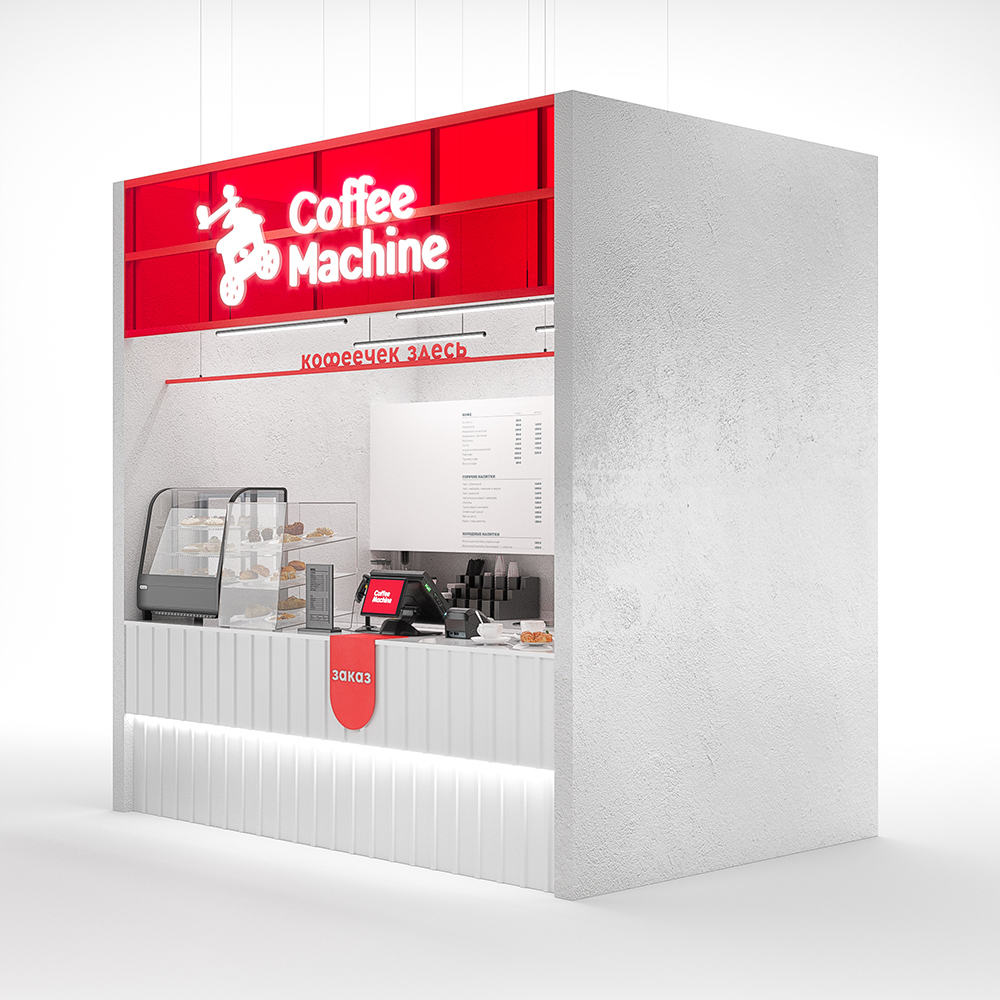 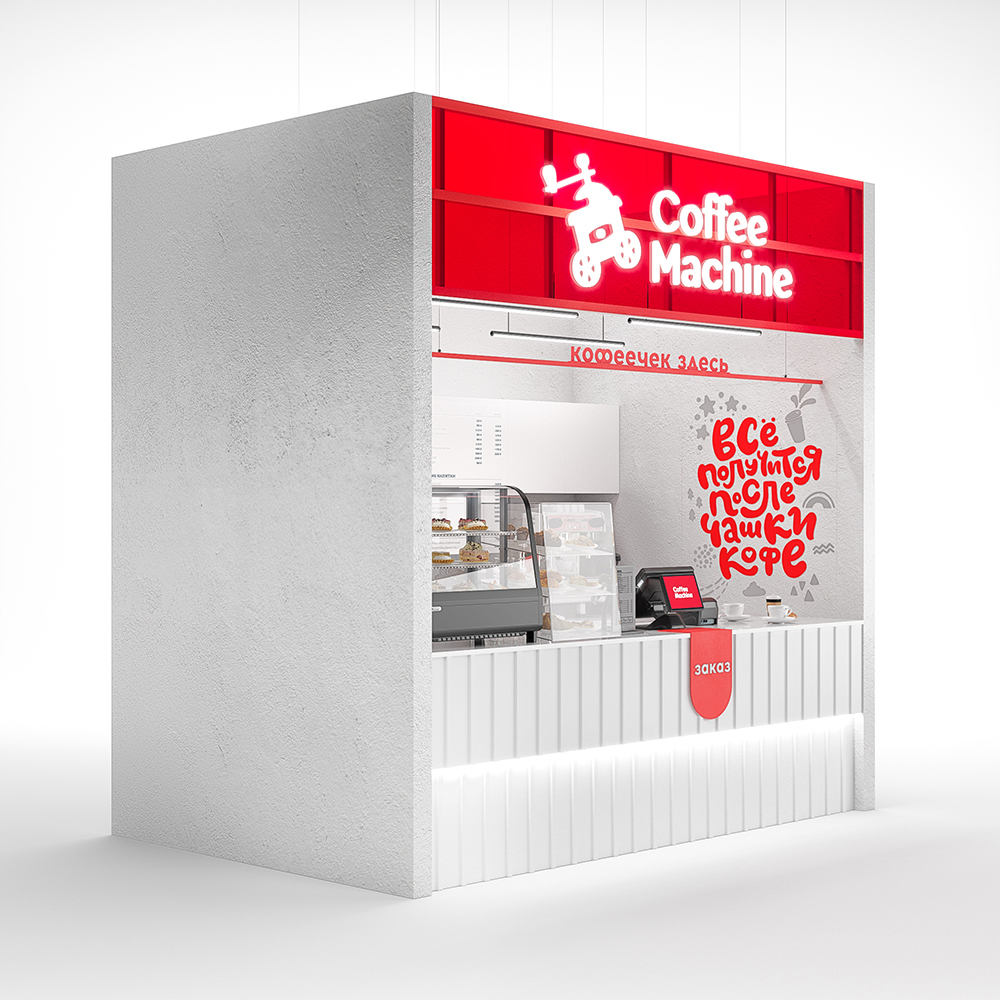 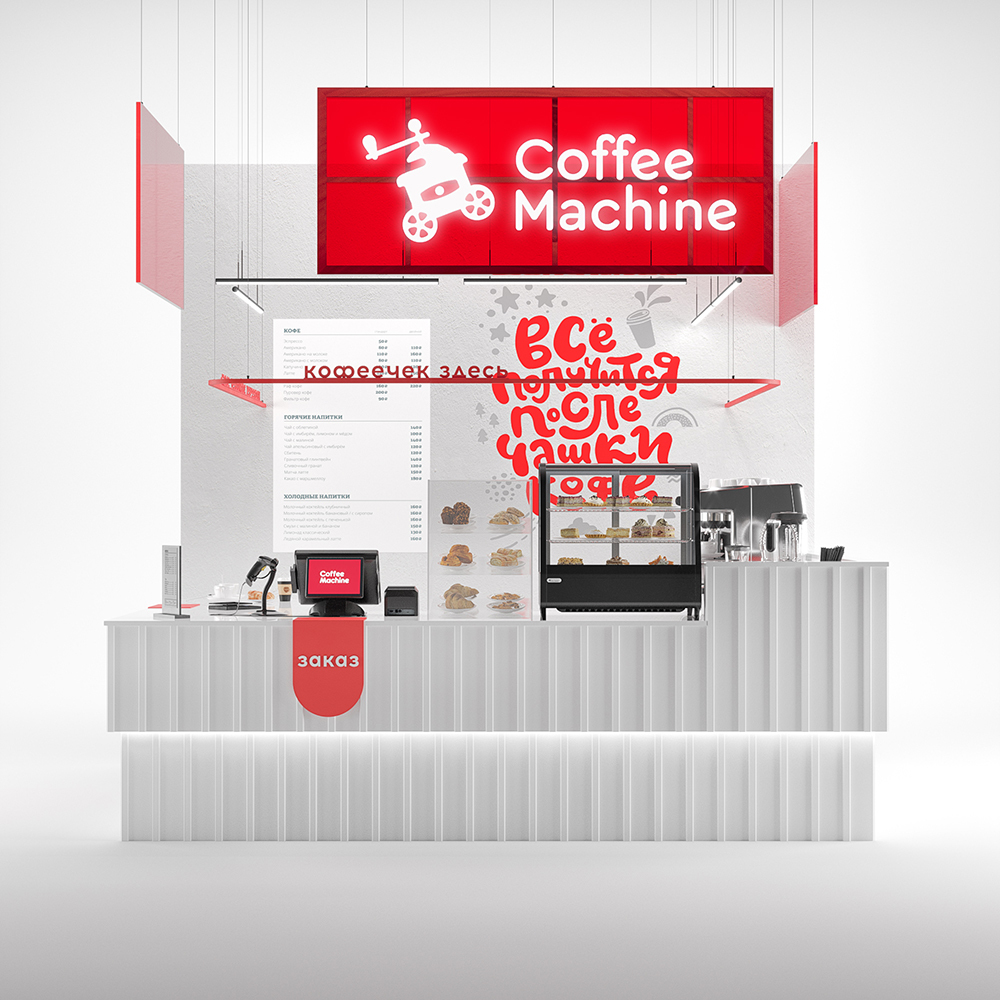 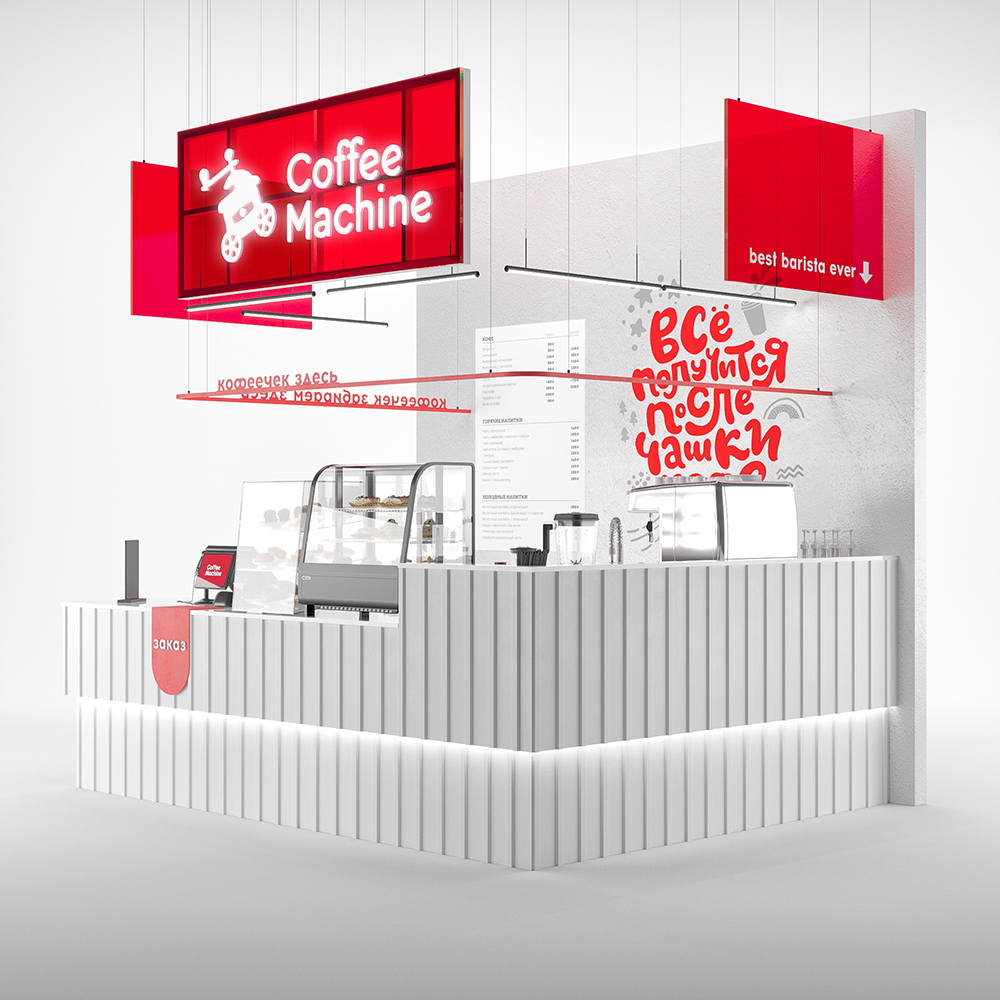 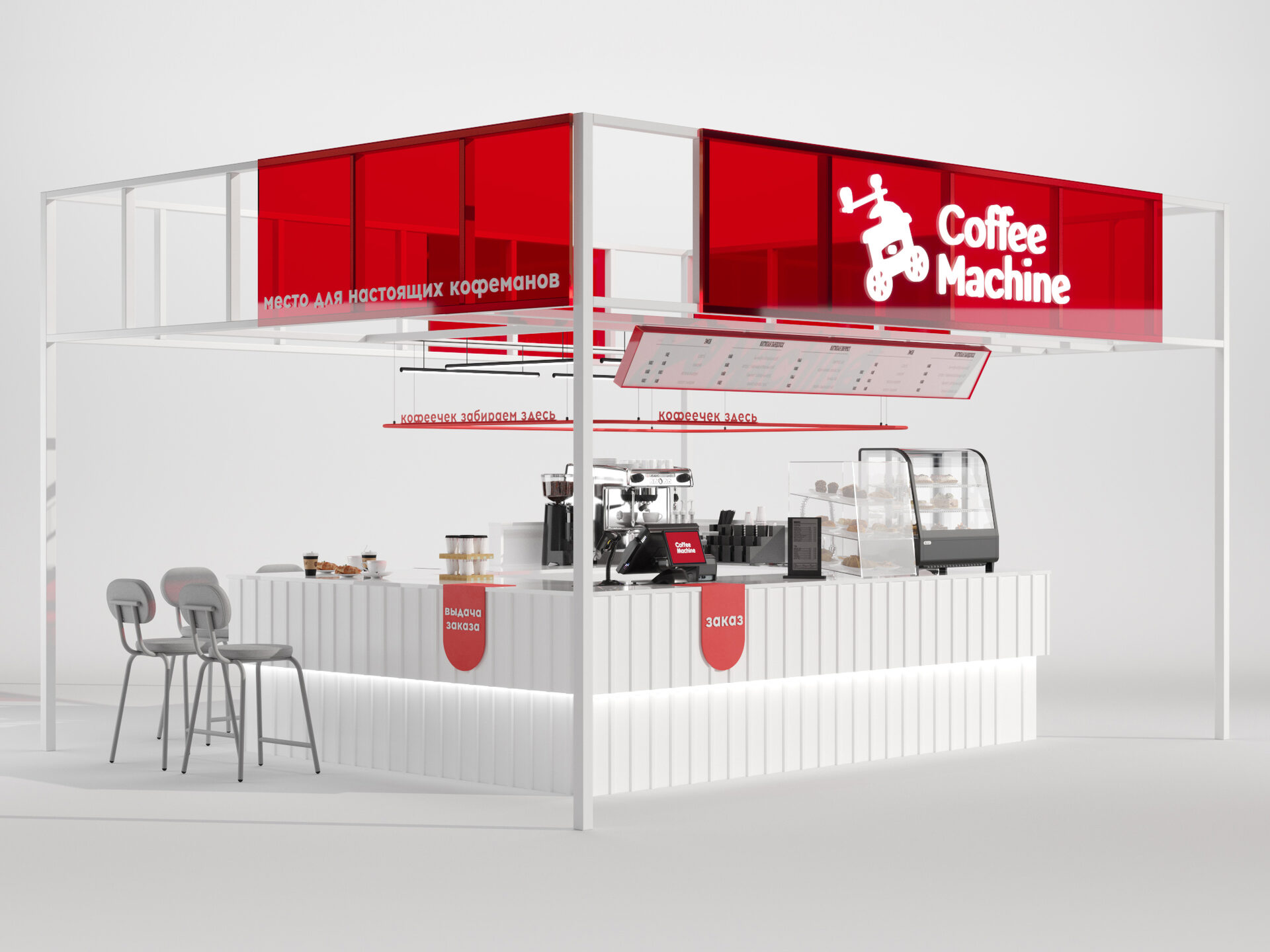 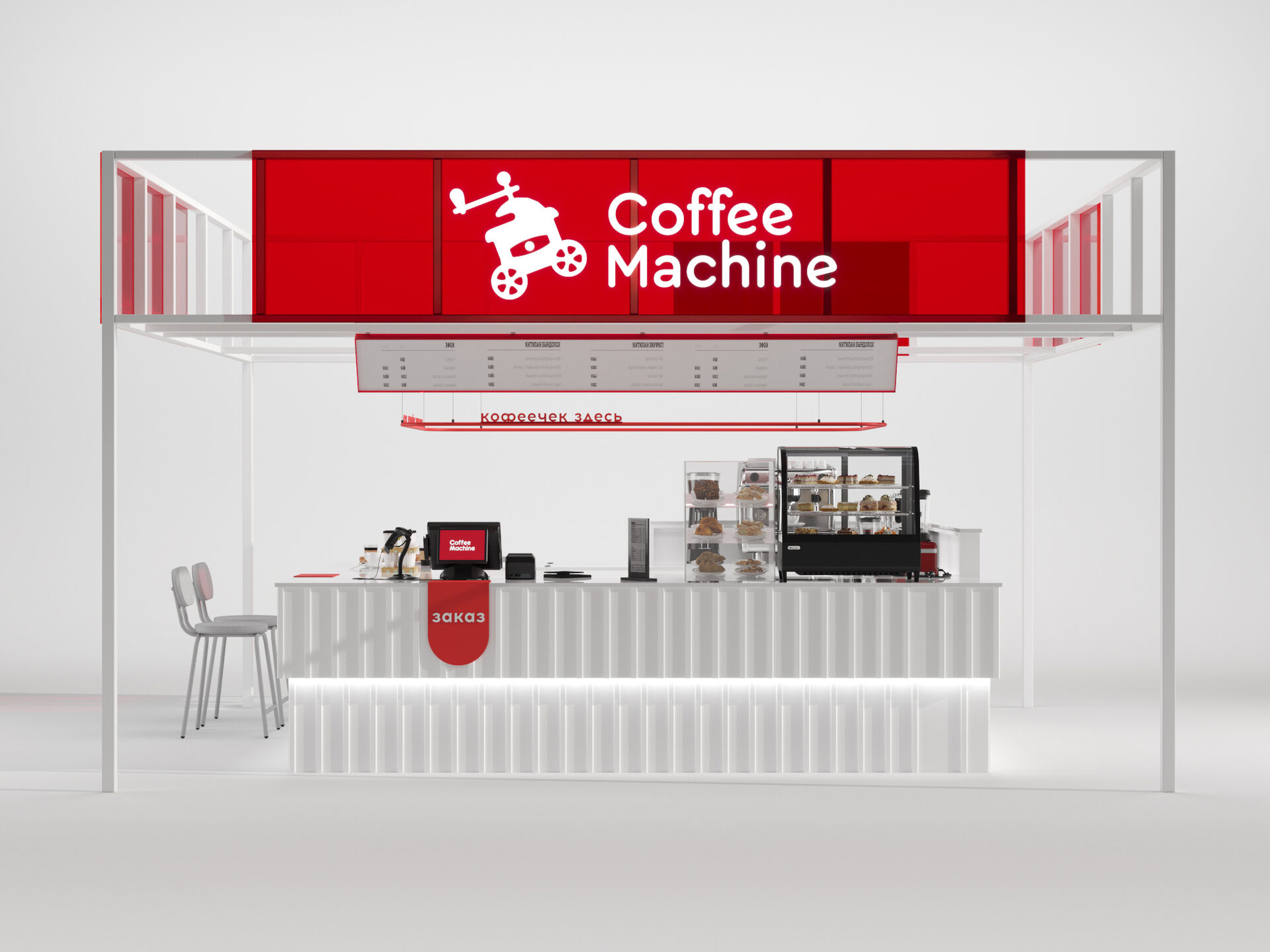 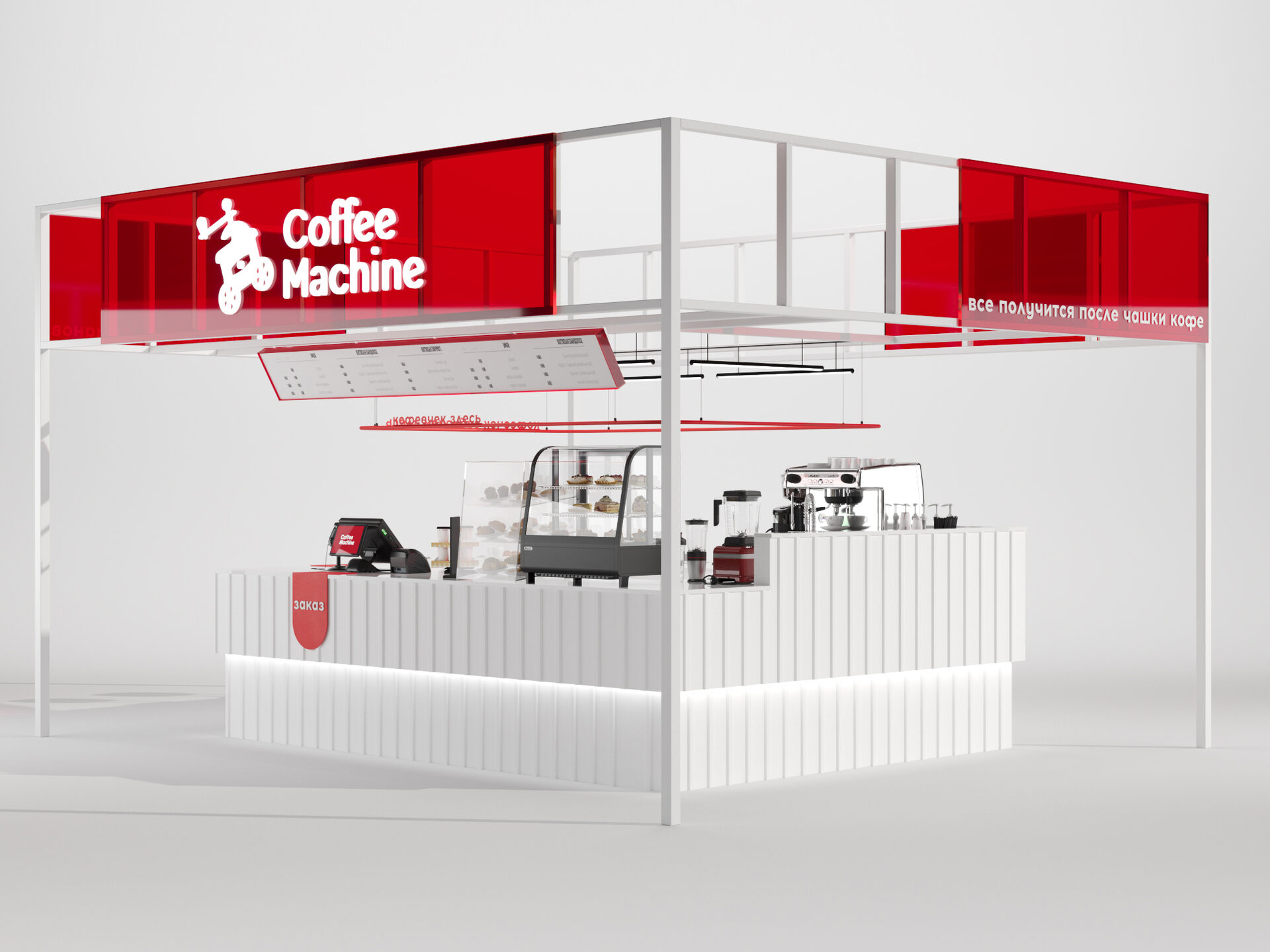 The key element of each module is a bright translucent sign made of red plexiglass, which helps mark the coffee stand in the space of the shopping center organically. The rounded metal perimeter with floating lettering refers to the flowing car shapes. A strip of light marks the entire structure of the module below, which helps visually raise the stand and convey the airy mood that appears after a cup of coffee. 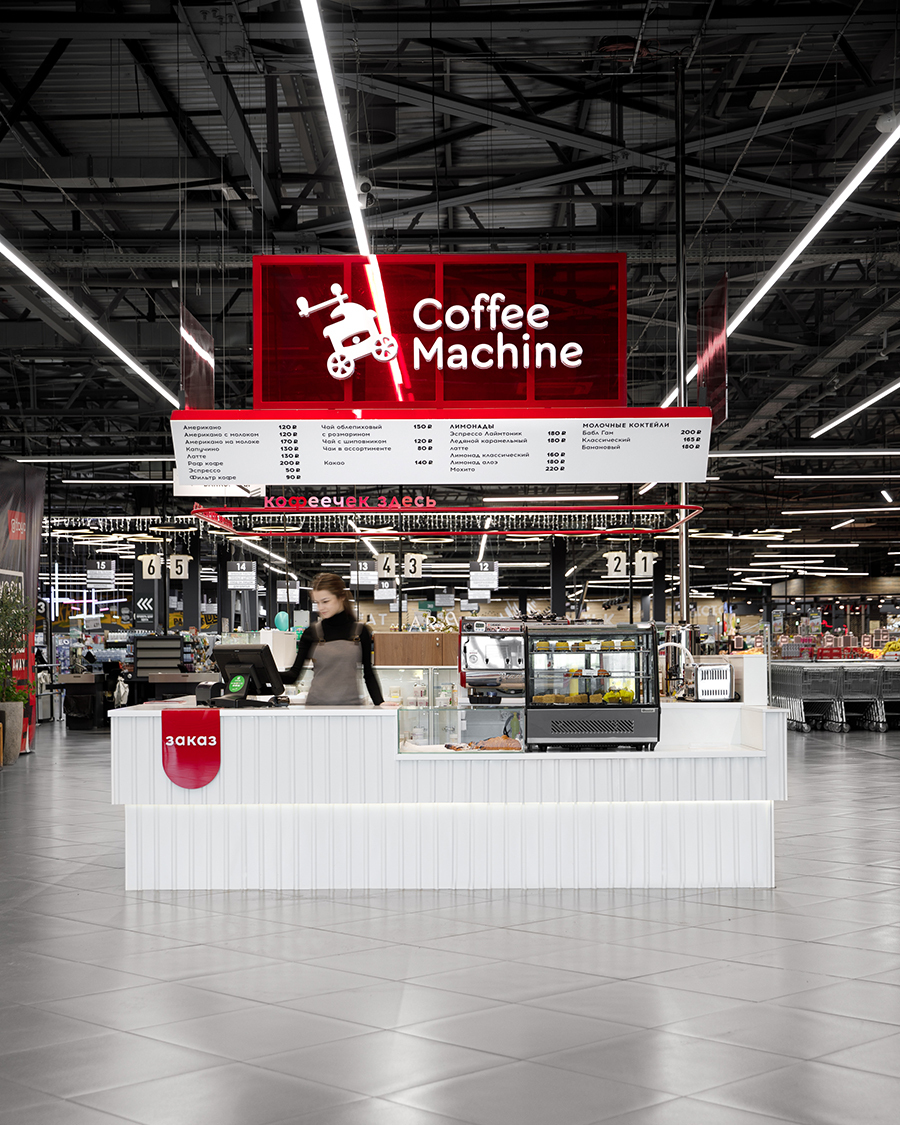 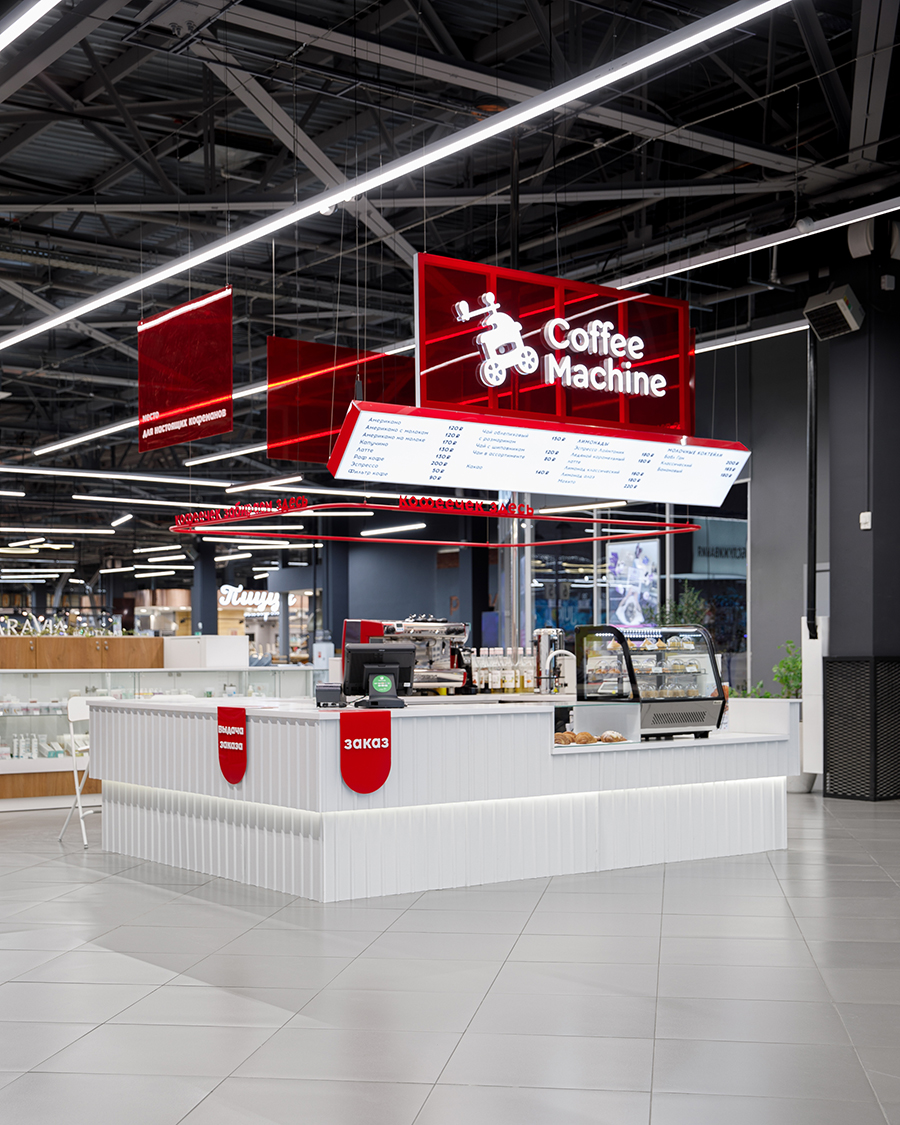 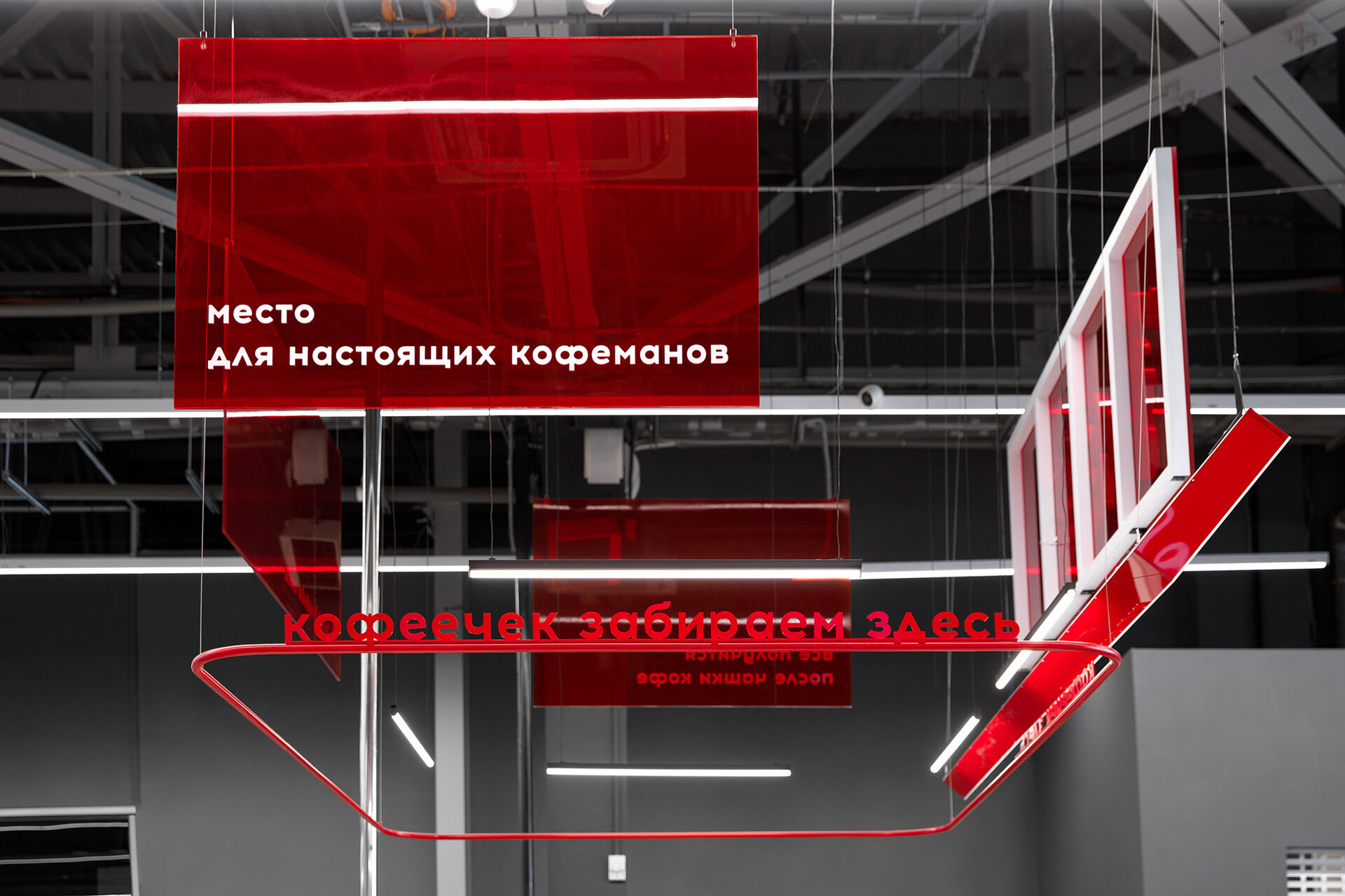 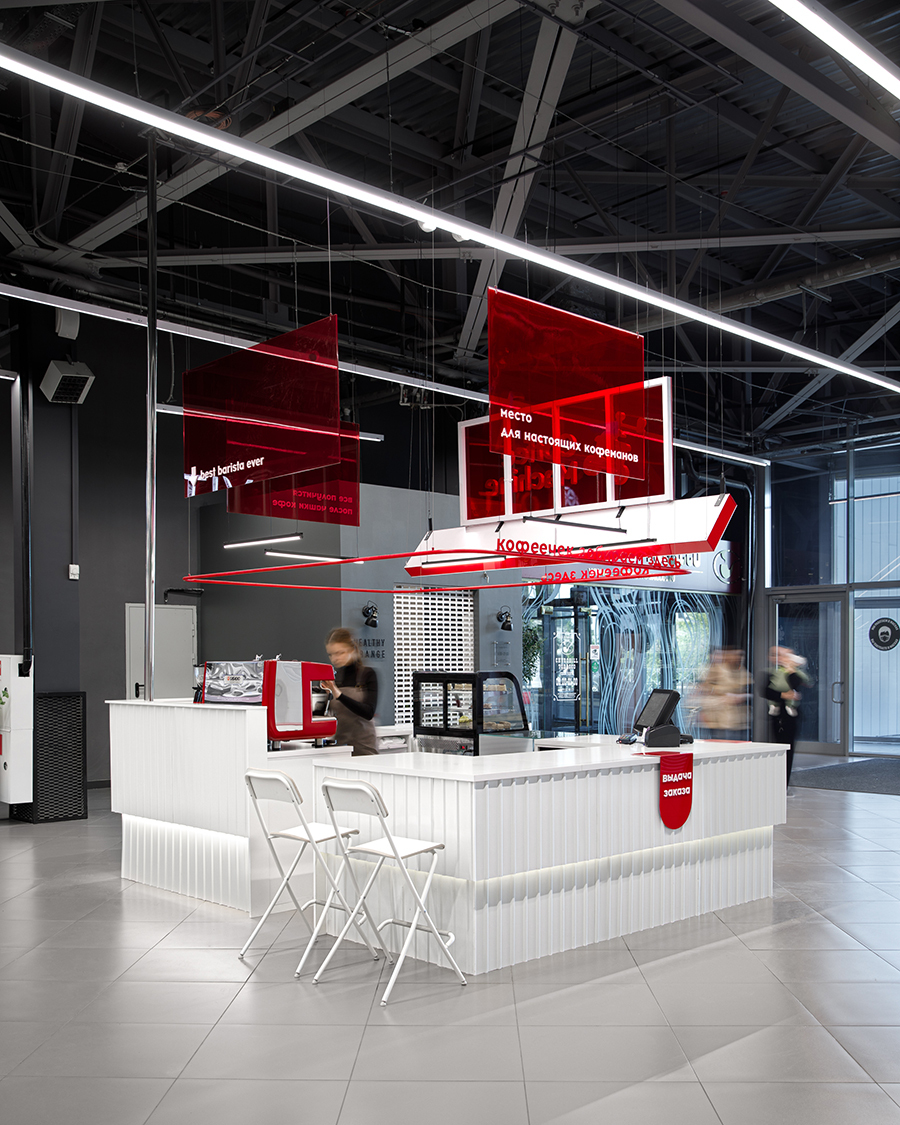 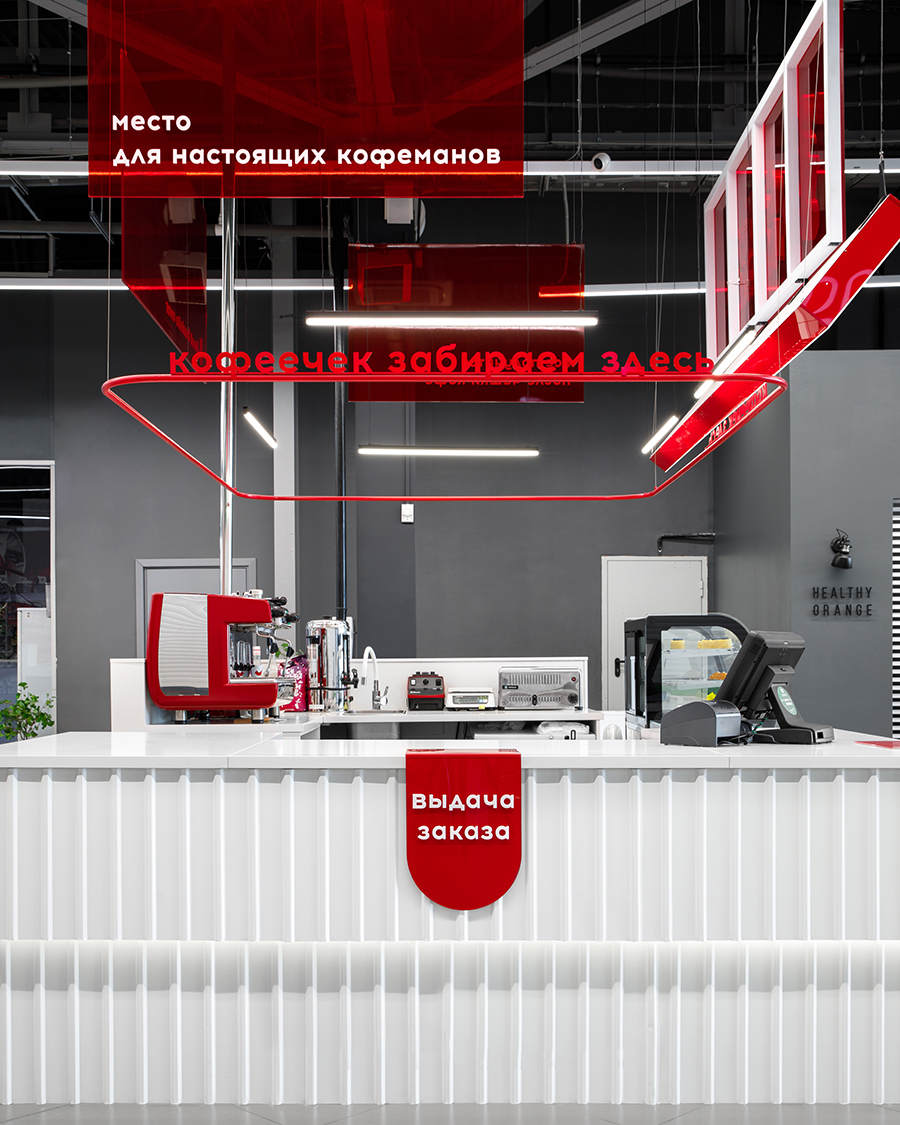